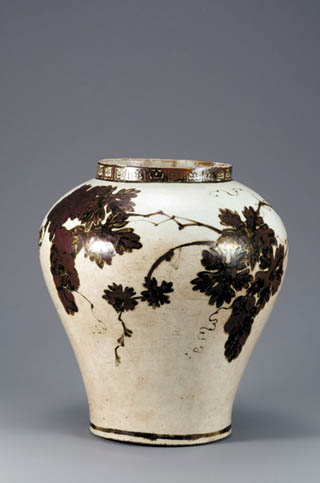 Made during the late Joseon period, this white porcelain jar has a height of 30.8 centimeters (12.1 inches), mouth diameter of 15 centimeters and foot diameter of 16.4 centimeters. It is characterized by a voluminous body with broad shoulders gradually narrowing toward the base.

There is a large grapevine motif brushed around the upper body in dark iron red and a band on the outside of the mouth.

The firm, unrestrained brush strokes depicting the vine and fruits so efficiently and beautifully suggest that the painting was made by a professional artist rather than the potter.

With the milky white glaze with light blue tint evenly coating the entire body, the jar is often regarded as one of the two greatest masterpieces representing the artistic achievement of the white porcelain ware of Joseon, the other being the White Porcelain Jar with Grape Design in Underglaze Iron (National Treasure No. 107) currently stored at the Ewha Womans University Museum in Seoul.