Ahn refuses to retract call for an NPAD convention

Ahn refuses to retract call for an NPAD convention 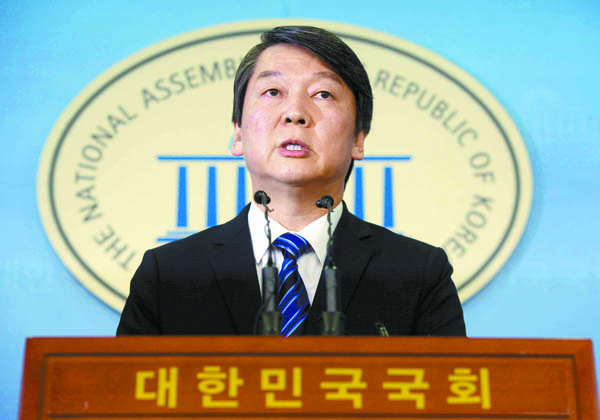 At a press conference in the National Assembly on Sunday, Ahn Cheol-soo, former chairman of the main opposition New Politics Alliance for Democracy, gives an ultimatum to Moon Jae-in, incumbent chairman of the party, to accept his demand to hold a party convention to elect a new leadership.[NEWSIS]

Opposition Rep. Ahn Cheol-soo gave party leader Moon Jae-in an ultimatum on Sunday to accept his demand for a party convention to elect a new leadership for the party, a move that directly pits the former party chairman against the current one.

“I ask you [Moon] to reconsider your decision on Dec. 3 that rejected a demand for a party convention,” said a somber Ahn during a press conference. He said a new convention was the only way to win back public support for the party.

Ahn hinted he could walk away from the party, saying that he would not make any more demands or proposals to change the party if Moon rejects his call again.

On Thursday, Moon rejected Ahn’s demand that he resign from his leadership and hold a party convention, saying a convention would only deepen factional fighting. He made clear he would stay in control of the party through the election.

Moon has proposed a troika to lead the party: himself, Ahn and Seoul Mayor Park Won-soon. The three are considered the most likely presidential candidates for the party in 2017.

With Ahn’s renewal of the demand, the future of the New Politics Alliance of Democracy remains hanging in balance, especially for party members disgruntled with the Moon leadership.

With strong words Ahn rebuked a list of points made by the party leader Thursday.

Ahn, a software-mogul-turned-politician, stressed that Moon could run in the convention to get a vote of confidence in his leadership. He said he would work under Moon’s leadership unconditionally if Moon got re-elected in a convention.

During the press conference, the former software mogul also pointedly asked why it took months for Moon to accept his 10-point demand to overhaul the party to increase its chances in the all-important April election. “Moon belatedly said he would accept my 10-pont reform plan,” Ahn said in a blunt tone. “I’d like to ask him why he did not accept them [three months ago] and instead tried to disregard and even criticize the same reform plan that he was willing to accept now.”

A series of demands and rebuttals has laid bare the lack of love between the two heavyweights, who also competed against each other to run for president for the party in 2012, and clouds the party’s prospects in the April election.

The NPAD has denied the estimate was officially carried out by the party’s headquarters.