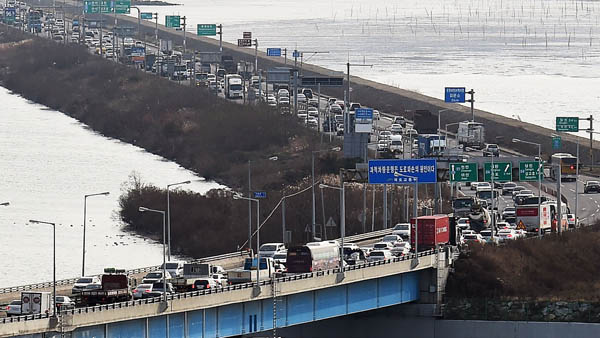 A road that is part of a detour around the Seohae Bridge near the Pyeongtaek center of Korea Rural Community Corporation is seriously congested Saturday afternoon after the bridge was shut down through Dec. 24 because cables were damaged. [NEWSIS]

Traffic on detours around the Seohae Bridge jumped drastically over the weekend, adding around two hours of extra driving time to motorists using them.

The Seohae Grand Bridge, a major artery connecting southwestern cities with Seoul, was shut down until Dec. 24 after three cables were damaged by a fire sparked by lightning on Thursday. One of the cables snapped.

In the first weekend after the Ministry of Land, Infrastructure and Transport announced the shutdown of the bridge through Dec. 24, nearby roads including two national highways ? No. 38 and 39 ? were congested, delaying operations of express buses running between the southwestern cities and Seoul by up to two and a half hours.

On Saturday, the number of cars using highway No. 38 increased by 65 percent, or 16,421 cars, to 41,700 vehicles, compared to a week earlier, according to the Korea Expressway Corporation.

An average of 95,600 cars use the six-lane bridge daily, and the number of cars that use the bridge usually increases by 20 to 30 percent on weekends.

It links Pyeongtaek, Gyeonggi, and Dangjin, South Chungcheong, where major heavy industries have factories and ports, to the capital region.

The ministry said it would take almost 20 days to replace the three cables, one snapped and two damaged by fire. A 54-year-old firefighter was hit by the snapped cable and died. Two other firefighters were injured.

The Korea Expressway Corporation said it started working on disassembling cables on Saturday and expected that the bridge could be partially operated from Dec. 25.

The cables, which are 50-meters (164 feet) long and 280-millimeters in diameter, extend from one of the towers to the bridge.

If the process of replacing the cables is successfully carried out, three Seoul-bound lanes on the bridge will be opened from Dec. 25, along with one or two Mokpo-bound lanes.

“We expect the roads near the bridge including national highway No. 38 and 39 will be congested until the bridge restarts operations,” an official at the corporation said. He advised motorists to make detours using the Gyeongbu or Jungbu expressways.

Police are investigating the cables to find out the exact cause and extent of the damage. It tentatively concluded that the cause of fire was lightning but asked the expressway corporation to provide CCTV footage from the site.

Police will look into both the cables and lightning rods to see if they were constructed as designed.