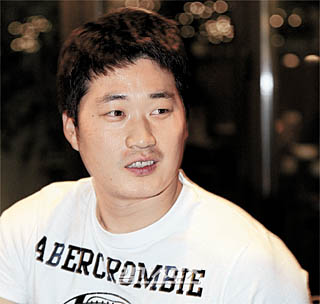 According to local media reports on Monday, the Seoul Central District Prosecutor’s Office recently received a statement from a member of a Korean gang surnamed Lee, in which he claimed Oh had gambled over 100 million won in the exclusive “junket room” Lee used to operate in Macao.

The prosecutors will reportedly summon Oh as early as this week. The local authorities have already indicted 12 businessmen, including Jeong Un-ho, CEO of cosmetic brand Nature Republic, for illegally gambling overseas.

Oh, 33, is currently in the United States to attend the Major League Baseball’s Winter Meeting, as the right-hander is looking to sign with American baseball clubs for next season. His contract with Japanese club Hanshin Tigers ends in this year.

Before Oh, the local prosecutors investigated former Samsung Lions pitcher Lim Chang-yong on Nov. 24. The 39-year-old reportedly admitted to some illegal gambling charges after a 13-hour interrogation. On Nov. 30, the Lions signaled their release of him from the team by deleting his name from its list of reserved players.

The Lions previously omitted pitchers Yoon Sung-hwan and An Ji-man from the Korean Series roster in October over suspicions of illegal gambling. Both have yet to be actually investigated by local authorities.

Oh made his pro debut with the Lions in 2005 and played until 2013 before moving to Nippon Professional Baseball in 2014. He is all-time leader in saves in the Korea Baseball Organization with five saves titles.

With the season over, Oh has set his sights on the MLB, while his Japanese club, the Tigers, have been hoping the Korean to stay with them. If he’s charged with illegal gambling, however, his ability to negotiate with clubs will likely be affected.

Oh’s legal agency released a statement on Monday that Oh wants to eliminate any suspicions of him as soon as possible so that he can return to negotiating with clubs in the United States and Japan. The agency said Oh has yet to receive specific instructions from prosecutors.