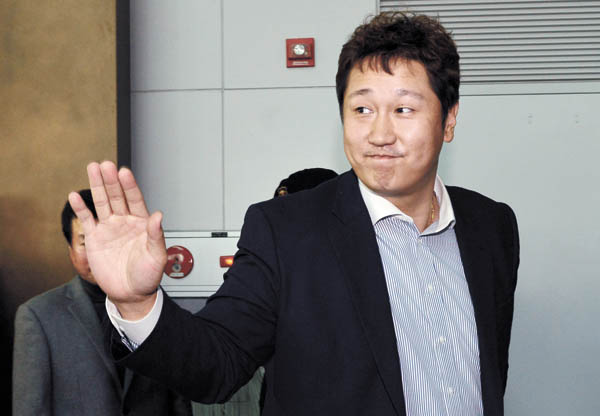 Korean slugger Lee Dae-ho said that four or five clubs in the Major League Baseball are interested on him as he left for the United States on Monday to negotiate with big league clubs.

After helping the Fukuoka SoftBank Hawks defend their title in the Nippon Professional Baseball (NPB) and winning the Japan Series MVP, Lee decided to opt out his contract with the Hawks to pursue his dream of playing in the MLB. The 33-year-old, whose nickname is “Big Boy” for his heavy 1.94-meter tall frame, announced his intentions for next season last month.

“Nothing has been determined yet, but I heard from my agency that four or five teams are interested in me,” said Lee at the Incheon International Airport on Monday. “I can know about details of my offer once I get there. I’m confident [I can sign with a club].”

Lee is going to the annual MLB Winter Meetings, at which representatives of all 30 MLB teams as well as minor league clubs convene for four-days to discuss league business and conduct off-season trades of players. This year’s Winter Meetings open on Monday, local time, in Nashville, Tennessee.

The former Lotte Giants and Orix Buffaloes player has signed on with Korea-based Montis Sports Management Group, which in turn has teamed up with American agency MVP Sports Group to represent him. MVP Sports Group clients include star players like Alex Rodriguez, Joey Votto and Albert Pujols.

“Winter Meeting will be a stage to promote Lee Dae-ho,” said an official from Montis Sports Management Group. “MVP Sports Group’s Dan Lozano will lead negotiations for of Lee.”

Just like Park Byung-ho, who recently inked a four-year deal worth $12 million with the Minnesota Twins through posting, Lee is another power hitter who has ruled the Korea Baseball Organization before moving to Japan in 2012.

With the Giants, where he played from 2001 to 2011, he had a .309 batting average, 225 home runs, and 809 RBIs in 1,150 games. The Busan native, who is also childhood friends with Texas Rangers’ outfielder Choo Shin-soo, was a three-time batting champion and two-time home-run king in the KBO.

Lee said he has his own salary standards, but emphasized that money isn’t the top priority in negotiations. Under the contract option with the Hawks, if he decides to stay with the Japanese champion, Lee can reportedly still receive a 5 billion won salary. The two-time KBO All-Star Game MVP added that there is no specific team in his mind, but hopes to sign with a club that has potential to win a championship.

“What’s important for a player is to play as many games as possible and become regular starting member,” he said. “I want to play for a team that really needs me.”

Lee said adjusting to new cultures isn’t a big problem because he already experienced life outside Korea. In his four seasons in the NPB, the right-handed hitter had a .293 batting average, 98 home runs and 348 RBIs in 570 games.

“I already lived in Japan, so adjusting to life in overseas isn’t a big deal,” he said. “In the MLB, I know there are lots of powerful fastball pitchers, so I should be prepared for that. But I’m confident with my batting.”

Lee began his KBO career as third baseman, but has mostly been first baseman or designated hitter in recent years. The four-time Golden Glove winner in the KBO added that playing in the National League in the MLB, which doesn’t have a designated hitter rule, is not a problem as he’s also ready for defense.

“I’m confident in my defensive ability,” he said. “When the club asks me to prepare for it, I’m ready.”