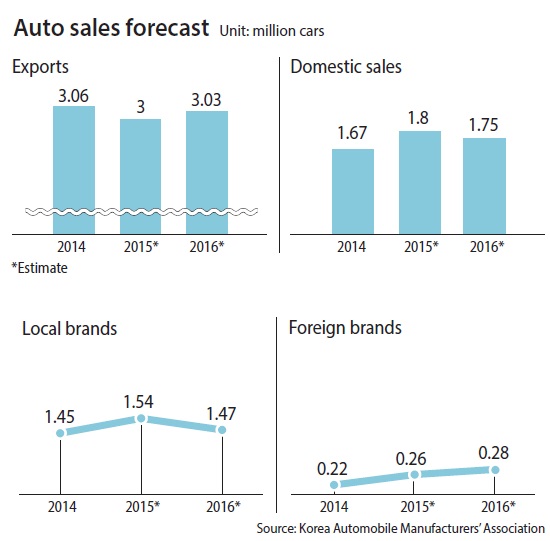 Domestic auto sales surged in November thanks to the temporarily lowered consumption tax on automobiles, which accelerated sales of new models released in the fall.

According to the Ministry of Trade, Industry and Energy on Monday, domestic automobile sales shot up by 14.4 percent to 165,570 cars in November compared to the same period last year, thanks to the government’s temporary reduction of the individual consumption tax on car purchases and new models being released such as the Avante, K5 and Sportage.

Foreign automakers saw their sales jump by 28 percent year on year to 26,100 cars in November.

“In addition to the lowering of the consumption tax, additional discounts and special promotional events offered by each automaker contributed to the sales boost,” said an official at the automobile and aviation division of the Industry Ministry.

The government decided to shave the individual consumption tax on automobiles to 3.5 percent from the usual 5 percent since Aug. 27 on both local and foreign cars to revive domestic consumption.

Local auto buyers could save from several hundred thousand won to a couple of million won in taxes depending on the sticker price.

As the tax break comes to end on Dec. 31, auto brands have offered discounts on new models and low interest rate loans via their auto capital affiliates.

The new Hyundai Tucson and other steady sellers like the i30, K3, Carnival and Sorento sold well, but overall exports shrank 3.5 percent year on year to 263,687 cars in November.

The weakest overseas markets were emerging economies - major buyers of Korean cars - such as Russia and Latin America, due to plunging raw materials prices.

Next year doesn’t look rosy either at home or abroad.

Domestic sales next year are estimated by the Industry Ministry to shrink 2.8 percent after the tax breaks end on Dec. 31.

There are tariff reductions scheduled for large markets like the United States, Canada and EU, but they won’t be enough to offset shrinking demand from emerging markets.

Exports of Korean automobiles are expected to rise as much as 1 percent to about 3.03 million units next year.

Tariffs on Korean automobiles shipped to the United States and Canada fall to zero starting on Jan. 1, 2016, according to FTAs.

The tariff to EU countries will fall to zero starting July 1.