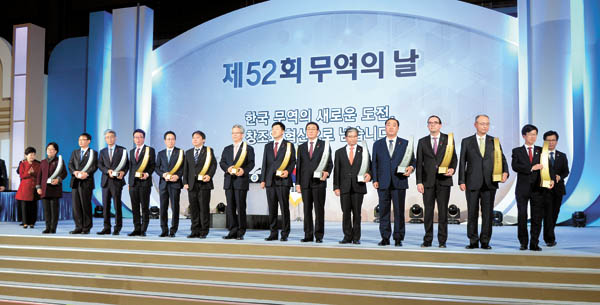 Korea’s trade volume may fall below $1 trillion for the first time in five years due to weakening imports and exports, but heads of trade still gathered for their annual celebration on Monday to recognize leaders in the industry.

President Park Geun-hye; Minister of Trade, Industry and Energy Yoon Sang-jick; Korea International Trade Association (KITA) Chairman Kim In-ho; and some 1,400 businessmen and trade industry insiders gathered at the 52nd Trade Day of Korea ceremony held at COEX in Samseong-dong, southern Seoul, on Monday, where some 680 businessmen and 1,328 companies were celebrated for their outstanding performances in exports.

KITA, which jointly hosted the awards with the Trade Ministry, has been giving the honors every Dec. 5 since the country first reached the $1 trillion trade volume in 2011.

“There are worrisome views about Korean exports, as we are expected to fail to achieve a $1 trillion trade volume in dollars this year due to cheap oil and raw materials prices. But Korean trade still stays strong in terms of the actual volume of traded goods,” President Park said in her congratulatory speech.

“The government will keep supporting exporters by expanding export finances and working proactively on mega-FTAs like the [Trans-Pacific Partnership] and [Regional Comprehensive Economic Partnership], as well as new free trade pacts with Mexico and Israel.”

AmorePacific Chairman and CEO Suh Kyung-bae received the Gold Tower Order of Industrial Service Merit for boosting its exports by 51 percent year on year to post about $197 million as of June. Suh was also celebrated for leading the nation’s largest cosmetics maker to develop the world’s first “cushion foundation” product in 2008, which escalated the Korean beauty industry’s position in the global market and make it a leading export to the Chinese market, among others.

SK Hynix was awarded the $15 billion Tower Orders for exporting about $16.89 billion year on year as of this June. Hyundai Steel, Hyundai Glovis and Renault Samsung Motors also received orders for their exports surpassing $5 billion, $4 billion and $2 billion, respectively.

Meanwhile, local analysts say that Korean trade will recover the $1 trillion level next year as the global economy will grow at a faster pace and demand will revive.

“Global economic growth is expected to reach up to 3.6 percent next year from 3.1 percent this year, which will bring up the global trade’s growth rate up to 4.1 percent from this year’s 3.2 percent,” Hyundai Research Institute wrote in a report released on Sunday. “As the global economy recovers, Korean trade will revive as well.”