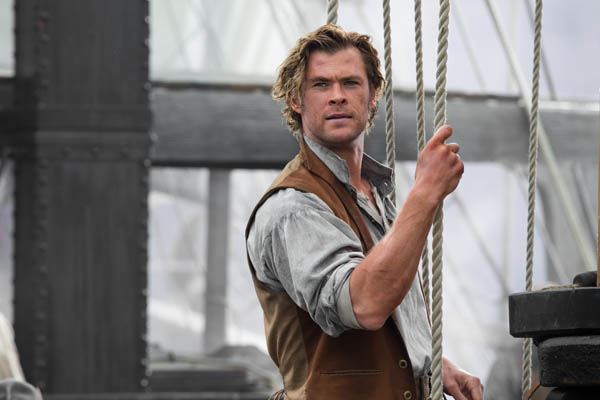 Maritime adventure “In the Heart of the Sea,” which tells the true story of a 19th-century whale hunt that acted as a motif for the classic novel “Moby-Dick,” started off slowly in Korea, opening in second place in the weekend box office.

According to the state-run Korean Film Council, “In the Heart of the Sea,” based on Nathaniel Philbrick’s award-winning book of the same title published in 2000, attracted 292,584 moviegoers over the weekend, making 2.6 billion won ($2.2 million). The film accounted for 17.6 percent of weekend box office sales.

Starring Chris Hemsworth as top navigator Owen Chase on a whale-hunting ship called the Essex, the film tells the story of how a team of 21 sailors returned with only eight members after an 80-ton sperm whale attacked the ship, leaving the survivors to drift 7,200 kilometers (4,470 miles) for 94 days in the Pacific Ocean.

The movie was directed by Ron Howard of “Angels & Demons” (2009), “The Da Vinci Code” (2006) and many more suspense-filled movies which were successful in Korea.

Making 39.7 billion won since it opened nationwide on Nov. 19, the R-rated film is on the verge of surpassing the record of “The Chasers,” which is the fifth most-watched Korean film that is rated 19-and-over.

“The Priests” came in third, adding 156,725 tickets sold to its accumulated total of 5.2 million. Amassing 40.4 billion won since it opened a month ago, this Korean-made occult film starring Gang Dong-won and Kim Yun-seok has definitely infused diversity to the domestic film scene, which has been heavily dominated by a select number of genres such as thrillers and costume dramas.

Local rom-com “A Dramatic Night,” starring Yoon Kye-sang and up-and-coming actress Han Ye-ri, opened in fourth with 180,133 tickets sold. Directed by Ha Ki-ho, this film shows what happens when two people going through recent breakups decide to spend a dramatic night together and continue to see each other afterward.

The much-hyped costume drama “The Sound of a Flower,” featuring Suzy from the girl group Miss A as a pansori (traditional musical storytelling) singer and Ryoo Seung-ryong as her teacher and love interest, fell nine spots to 13th place in its second weekend. The film has sold 300,729 tickets so far, earning 2.1 billion won.