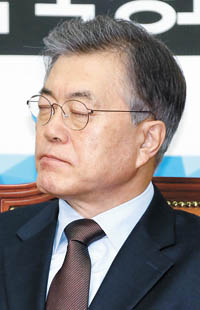 The opposition New Politics Alliance for Democracy (NPAD) began working on changing its party name on Monday, a move that could draw protest from Rep. Ahn Cheol-soo, who co-founded the party with its current name less than two years ago.

The decision came just a day after Ahn’s ultimatum to NPAD Chairman Moon Jae-in to accept his demand to hold a party convention next month to elect a new party leader.

The NPAD’s move was seen as part of efforts by the current leadership to erase any evidence of Ahn’s grip on the party.

“In a poll conducted of party delegates, 73 percent of respondents supported a name change,” said Rep. Jun Byung-hun, who heads the party committee tasked with that responsibility. “The party will launch a public contest for name suggestions starting Monday and will decide on the final name through public and party participation.”

The NPAD said it would accept recommendations from the public via email this week and determine a list of candidates before the final decision.

That means the NPAD would be reintroduced under a new party name by Feb. 1.

The decision appears to reflect the growing schism between Moon and Ahn, who co-founded the NPAD in March 2014 with Democratic Party leader Kim Han-gill. The new party was formed through the merger of the main opposition Democratic Party and Ahn’s supporters.

The former co-chairman has opposed the idea, arguing that a simple name change cannot reform the party’s fundamental issues.

The NPAD’s move on Monday comes amid growing tension between Moon’s loyalists and lawmakers critical of his leadership, including Ahn, who have demanded that Moon step down in order for the party to stage a convention to elect a new chairman.

Moon told reporters on Monday that he still would not comment on Ahn’s demand and said the party should continue to look for ways to achieve unity and cooperate.

Ahn’s appeal would require him to relinquish the chairmanship.

Moon, who initially proposed that he, Ahn and Seoul Mayor Park Won-soon form a three-man political alliance, adopted a resolution on Monday to convene a central committee meeting on Dec. 14.

The NPAD chairman is expected to adopt a 10-point reform proposal drawn up by Ahn in October during talks next week.

On Friday, Moon said he would accept Ahn’s package of proposals to overhaul the party in an apparent bid to placate him. Still, at a press conference on Sunday, Ahn questioned why it had taken Moon nearly two months to respond to his suggestions and made clear that he would not back down unless his demand for a party convention was answered. He left Seoul immediately after and has not reached out to the press.

Ahn is likely to resign from the NPAD in the event that Moon refuses to accept the call for a party convention. In a display of deep divisions within the party, floor leader Lee Jong-kul and Supreme Council member Joo Seung-ryong on Monday skipped the Supreme Council meeting over which Moon presided.

In an interview on Sunday with the JoongAng Ilbo, eight of 10 people with political ties to Ahn anticipated that he would step down from the NPAD if Moon did not meet his demands. It’s possible that Ahn could seek a merger with the independent Rep. Chun Jung-bae and his supporters.

Such a move could potentially see representatives from the Jeolla region, the opposition’s traditional stronghold, follow suit.