Park warns of time running out

Park warns of time running out 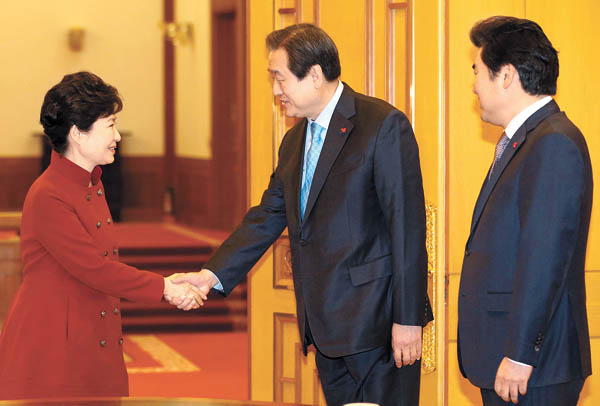 President Park Geun-hye and the ruling party started a political campaign on Monday to facilitate the passage of delayed economic bills before the end of this year, but the main opposition party remained unresponsive.

Park invited Saenuri Party Chairman Kim Moo-sung and floor leader Won Yoo-chul to the Blue House to demand stronger legislative efforts as the National Assembly is running out of time. Tomorrow marks the end of the last 100-day regular session of the 19th National Assembly.

On Monday, all 157 lawmakers of the Saenuri Party demanded an extraordinary session to begin on Thursday.

Park, accompanied by key aides, met with Kim and Won for 50 minutes to discuss the delayed economic bills, including a package of five bills intended to reform Korea’s labor market. Overhauling the country’s rigid labor regulations is a key reform promised by Park.

During the meeting, Park made lengthy and candid opening remarks to express her frustration with the legislature. She made a direct appeal to the public about the need to pass the bills before the end of this year.

“Reviving the economy cannot be done anytime,” Park said. “There is a golden time. If we miss this time, everything will be useless, no matter how hard we try. This is the last crucial moment, and we must complete these important issues during the regular session in order to strongly support the economy.”

Park said the economy saw some room to breathe when the National Assembly finally ratified free trade agreements, including a pact with China, but there are still important bills to be approved.

The ruling and opposition lawmakers also approved next year’s budget on Thursday, but they failed to meet a statutory deadline due to prolonged backroom dealings.

The ruling party and main opposition New Politics Alliance for Democracy (NPAD) also struck a deal on a legislative timetable early Wednesday, but no progress was seen so far. They agreed that economic bills, including a basic act for service industry development, will be passed before the end of the regular session as well as a counterterrorism bill and a North Korea human rights bill.

The two sides also agreed that they would start discussing the labor reform bills as soon as possible and hold an extra session to vote on it. No legislative activity, however, took place at the National Assembly as the NPAD is consumed with an internal power struggle.

Park said the economy will be revived when the lawmakers quickly pass the bills. “We are doing nothing with our hands while we just continue worrying,” Park said. “We just groan. Will that make money fall from the sky?”

The package of five labor reform bills is intended to “create proper jobs for our children and guarantee secure retirements for the parents,” Park said. “If this is delayed again, we will be trying to resuscitate the economy after its death. We must save the economy before it dies.”

She said the bill intended to develop the services sector will create about 700,000 new jobs, and the young generation is waiting for its passage. “But the bill has been pending at the National Assembly for 1,337 days as of today,” Park said.

Another bill to establish a special law designed to reduce legal procedures required by existing laws and provide tax cuts in cases of voluntary business sell-offs and purchases, often known as the “One-Shot Act,” was also promoted by Park. It also covers mergers and acquisitions for companies and industry sectors in crisis due to oversupply. “If we are too late, this law will have no use,” Park said.

She lamented that the National Assembly has failed to pass a counterterrorism bill.

“We will see no warning of a terrorist attack,” Park said. “Korea has become a country that is so easy to be targeted. But the bill is still pending at the legislature. It is unacceptable because the politicians and National Assembly must make the safety of our people the top priority. This is urgent.”

“If we fail to do so, we will regret it forever,” Park said. “We will have an election next year, and how can we hold our heads up before the people? The public will wonder what we have actually done. So we must do what we must do.

“What will the politicians promise the people in the next general election?” Park asked. “Won’t they promise to protect the public’s safety, revive the economy and create jobs for our sons and daughters?”

Kim said he promised Park the ruling party’s fullest efforts to persuade the NPAD to pass the labor reform bills before the end of this year, stressing that the bills are the outcome of a grand compromise reached via negotiations among labor, business and government.

“I didn’t discuss with the president our negotiation strategy with the opposition,” Kim said, dismissing the possibility that Park would meet with NPAD leaders to persuade them.

Won said the party and the president will appeal to the public to pressure the NPAD, criticizing the opposition for abandoning the agreed legislative timetable. “This is a breach of trust to the people,” Won said. “I earnestly urge them to show responsibility.”

Won dismissed the possibility for now that the ruling party will ask the National Assembly speaker to use his power to directly introduce the bills for voting by skipping the standing committee reviews.

Park and Kim also had an exclusive meeting, Won said, but he refused to say how long the one-on-one meeting was or what they talked about.