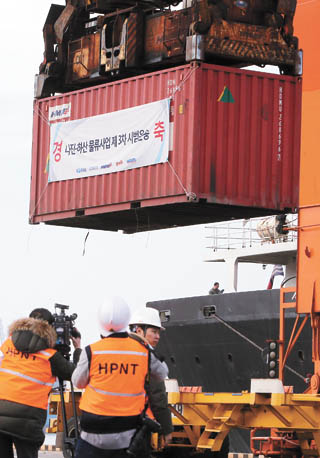 Workers unload containers filled with bottled water from a freight ship at the Port of Busan on Monday after the cargo was transferred through the Rajin port in North Korea. The 10 containers of bottled water were produced by a factory run by the South Korean company Nongshim in Erdaobaihe, a Chinese border town close to Mount Paektu in North Korea, the highest peak on the Korean Peninsula. The arrival of the containers on Monday was part of the third test run of a project involving South and North Korea and Russia. [NEWSIS]