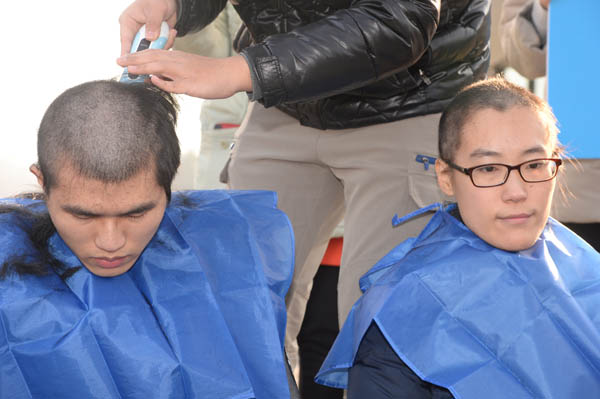 Three people preparing for the bar exam have their heads shaved during a rally in front of the Seoul National University on Monday to demand the exam be kept. [NEWSIS]

As hundreds of students from three-year law schools fiercely protested the Ministry of Justice’s announcement that it will delay the abolishment of the traditional bar examination, others aspiring for a career in the legal field stepped up to demand that the old system be maintained.

A group of 106 people who have been preparing for the old bar examination - which does not require that test-takers be enrolled at costly Western-style law schools - announced Monday they will be filing an appeal with the Constitutional Court against the National Assembly’s Legislation and Judiciary Committee.

Na Seung-chul, an attorney representing the group, held a press conference at the National Assembly on Monday and called the standing committee’s delay in passing a bill to maintain the traditional bar exam system, “a clear violation of the principles of sovereignty of the people and democracy.”

He added that the abolishment of the old system was not constitutionally supported.

“The judiciary committee had plenty of time to review the law on keeping the bar exam but wasted over a year,” he added.

On Thursday, the Ministry of Justice announced that it will delay abolishing the state-run bar exam until 2021, which prompted student associations from the country’s 25 law schools to threaten to drop out en masse. They also boycotted classes and state-administered tests.

On Friday, 464 of the total 480 students enrolled in the Seoul National University School of Law submitted withdrawal forms to the school’s administration in protest.

The old bar exam was initially scheduled to be abolished in 2017 with the full adoption of a U.S.-style three-year law school system, which was first introduced in 2009.

Under the old system, those who pass the traditional bar exam go on to study at the Judicial Research and Training Institute before practicing law. If the bar exam - which is open to anyone - is abolished, only those enrolled at the country’s 25 law schools will be eligible to take the qualifying exams to become lawyers, prosecutors or judges.

On Monday, three people preparing for the traditional bar exam staged a rally in front of the SNU School of Law and shaved their heads in protest of the reaction by law students.

They referred to the moves by the students as “collective self-centeredness to construct legal elites” and called for the school administration to tender their withdrawal forms. The three also demanded that the bar exam and the Judicial Research and Training Institute be permanently maintained.

“I am here because I want to have a chance to continue to try to pass the bar exam. As someone preparing for the exam right now, the best I can do is shave my head,” said Park Won-ho, a 30 year-old woman.

Starting Monday, students from the SNU School of Law began holding one-man rallies in various locations to protest the delay of the bar exam’s abolishment.