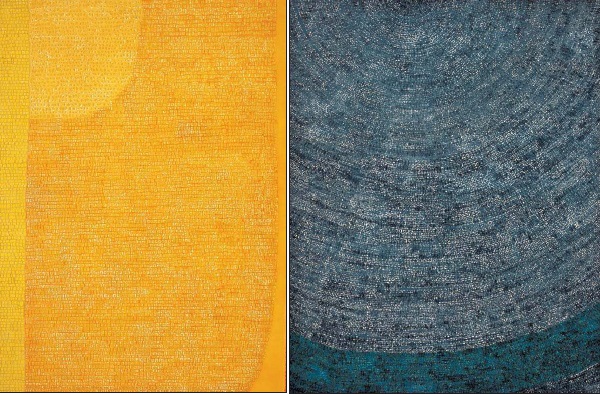 With the popularity of Korean abstract art pioneer Kim Whanki (1913-74) increasing in the international auction market, an exhibition of 22 works created during Kim’s so-called New York period (1964-1974) is underway at Gallery Hyundai in central Seoul.

Kim’s abstract paintings from this period, in particular the so-called dot paintings, are regarded as the most important works by the artist. The large-scale oil-on-cotton paintings are filled with tens of thousands of round dots, surrounded by layers of square borders that spread and smoothly permeate the cotton.

Among these dot paintings, “19-VII-71 #209” (1971) fetched 31 million Hong Kong dollars ($4 million) at a Hong Kong sale by Seoul Auction in October, becoming the most expensive Korean artwork ever sold at auction.

Another dot painting, “Where in What Form, Shall We Meet Again” (1970) - named after the last two lines of a poem by Kim Kwang-sup’s - ranked first on a list of the most important 20th-century Korean visual art, based on a survey of art critics in November. The painting is now on display at Gallery Hyundai’s exhibition “Kim Whanki: Line, Surface, Dot,” which runs through Jan. 10.

According to art historians, Kim was popular in Korea before going to New York, with his unique half-figurative, half-abstract oil paintings that depict Korean and East Asian motifs such as Joseon-era (1392-1910) white porcelain jars, the moon, mountains, clouds and cranes. He had never changed his style even during his stay in Paris between 1956 and 59.

But after participating in the Sao Paulo Art Biennial in 1963, he went to New York and converted to pure abstract art. Art historians assume he was impressed by the visual power of American abstract expressionism, as the center of modern art shifted from Paris to New York.

The 22 paintings now on display at Gallery Hyundai summarize Kim’s various experiments in New York. And 13 of the works are dot paintings, which are regarded as the apex of Kim’s oeuvre. Most of them give a cosmic feeling, not only because the dots are reminiscent of stars, but also because the big canvases and rhythmical repetition of dots give a sense of infinity, and then the sublime.