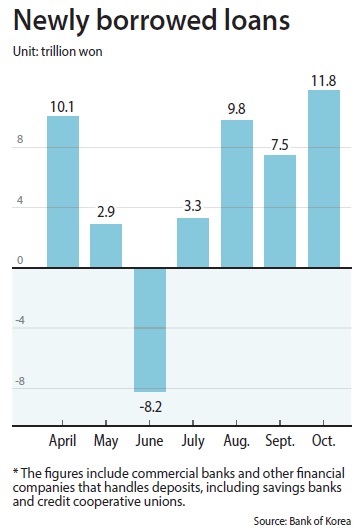 Household debt has continued to increase at an alarming rate, largely on the back of a bullish property market and the government’s policy of encouraging consumers to spend through events like Korea’s Black Friday.

According to the Bank of Korea on Tuesday, more new loans were taken out in October than in any other month on record, breaking the previous high set in April.

In just a month, 11.8 trillion won ($10 billion) in fresh loans were borrowed from commercial banks and other financial companies, including savings banks and credit union cooperatives.

The previous record was set in April, at 10.1 trillion won. As of October, the total borrowed by Korean consumers was 792.4 trillion won.

The biggest increase came from mortgages, which added 7.5 trillion won in new loans in October due to a lively housing market. The number of apartments sold in the greater Seoul area in October totaled 348,899 - the most apartments sold in a single month since related data has been compiled since 2006, according to real estate information provider Budongsan 114.

Government policies encouraging consumers to spend in hopes of bolstering the domestic economy were also seen to have contributed to the increase in loans. In October, the government pushed for a Korean version of the famed Black Friday sales. As a result, other loans, including unsecured loans borrowed from household, added 4.3 trillion won, the largest amount since February 2008.