Couples finally get their dream honeymoons

Couples finally get their dream honeymoons 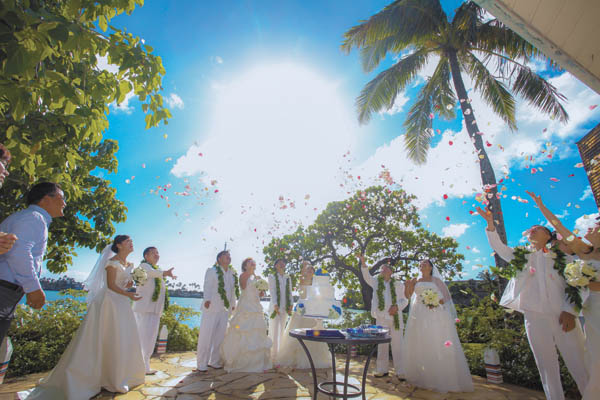 Couples throw rose petals in the air at the end of the group wedding ceremony held at the Hawaii Kai Marina Chapel Wedding in Honolulu. [BELLEVUE HAWAII]

HONOLULU AND WAIMEA, Hawaii - Usually, married couples reminisce about their wedding day and honeymoon as among the happiest times of their lives.

Often the wedding is the couple’s first - and possibly last - chance to be surrounded by and showered with love and gifts from family members and friends.

But Choi Myeong-san and his wife, Bang Chun-hyang, who was born in China but became a naturalized Korean citizen several years ago, never got to have such an experience, until now.

When they got married, the couple, who fell in love while working at the same clothing materials company, was not able to afford a wedding. Instead, the two just registered their marriage before getting an apartment, where they moved in together to start working to save for their future family.

In a financial situation so tight that Bang even learned to ride a bike to avoid the cost of public transportation, a wedding ceremony seemed like an unattainable dream, never mind going on a honeymoon abroad.

“We didn’t hold an official wedding ceremony, nor did we go on a proper honeymoon,” Bang told the Korea JoongAng Daily.

“As a matter of fact, the only place we went during 11 years of being married was a nearby riverside to go fishing with our children, because my husband can only take one day off per week. Even Jeju Island, which is a very commonplace travel spot for Koreans, was far away for us,” the 38-year-old said, her bright smile unwavering. 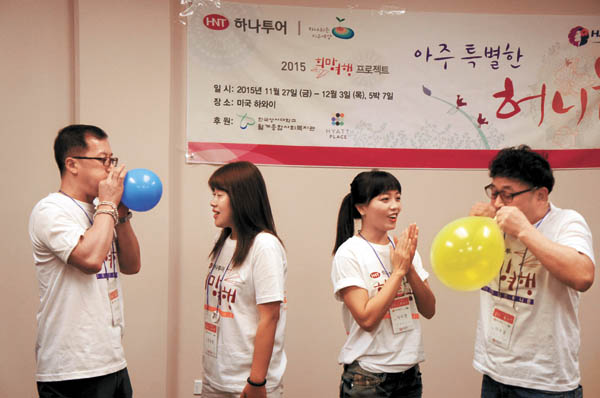 Bang eventually quit her job at the company to focus on raising their two children, who are now 16 and 10 years old, but she has been continuously doing side jobs at home after the children go to sleep.

“It only earns us about 200,000 won [$170] per month, and it gave me an aching back. But although it is a small amount of money, I had to do something to be a meaningful member of my family.”

For these reasons, the couple would have never dreamed of having an experience such as the one recently offered to them by Hana Tour. As part of its corporate social responsibility (CSR) program, the nation’s top travel agency sponsored six underprivileged couples to enjoy a wedding ceremony and honeymoon in Hawaii for five nights under the title “Very Special Honeymoon.”

The airline tickets were provided by Hawaiian Airlines.

“I was so happy that we were accepted to the program, but frankly speaking we didn’t have anything ready for the trip,” Bang said as she held up a medium-sized suitcase, which contained clothes and even a pair of sneakers that she said were borrowed from her younger sister, who was looking after her children while she was away. 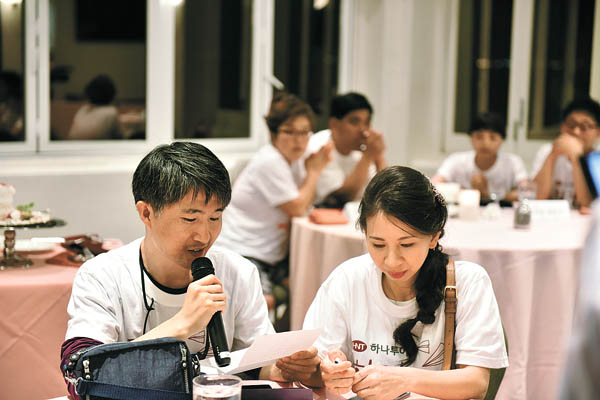 Lee Seung-kwan, left, and Tran Phuong Thien Huong read handwritten letters to each other. Both activities were special programs designed by Hana Tour in a bid to help the couples relax and enhance their relationships. [HANA TOUR]

“She and both of our children know that we have worked really hard, devoting ourselves to the children, so they encouraged us to go on this trip” Bang said.

“Now that I am finally here, I feel like I escaped home.”

The situation was similar for another multicultural couple consisting of Lee Seung-kwan and Vietnam-born Tran Phuong Thien Huong, who is also a naturalized Korean citizen.

“When we were first married, I promised my wife that we would hold a wedding ceremony and go on a honeymoon before our baby turns 5,” said the 42-year-old Lee, who has been married for nine years. “But now my little girl is 7 years old, but we still haven’t been to any other countries except for Vietnam, where we went several years ago to meet her family.”

For Lee and Tran Phuong, things have been even tougher because of discrimination toward Vietnamese women.

“Just because my wife is from Vietnam, people look down on us,” Lee said. “For example, when we are in line at a supermarket, they cut in front of us and don’t even show the slightest sense of guilt.”

“For that reason, I didn’t want her to go outside,” he added.

But with the couple earning an unstable income from selling gimbap (rice rolls) on the street, it wasn’t easy for the 33-year-old Tran Phuong to raise a baby in a foreign country by herself.

“At home, I couldn’t let the baby wear a diaper because it is expensive. I have never bought powdered milk, either,” she said, adding that the Wolgye Welfare Center in Seoul, where she was able to learn Korean with her baby on her side, was the only place where she could hang out.

It was also the welfare center that recommended the couple for the Hana Tour program.

“I am overwhelmed to be here and I still can’t believe it,” Lee said. “But at the same time, I am kind of anxious about the fact that this will be my last time here. I’m trying to soak up everything I see, but I can’t fully enjoy it because of the harsh reality that awaits us back home.” 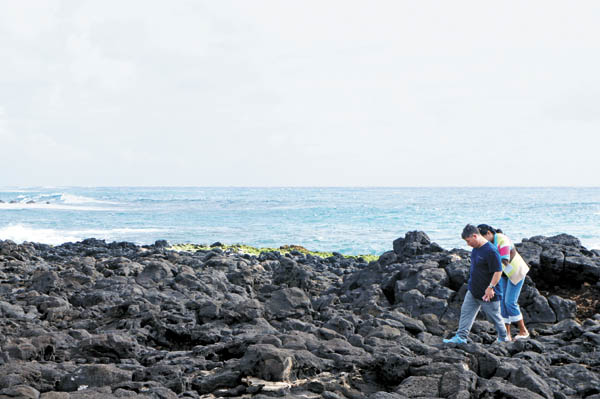 During the five-day program, the six couples, all of whom were visiting the tropical island state for the first time, saw almost every major tourist spot in Hawaii, including Waikiki Beach, the Hanauma Bay Observatory and Makapu’u Point.

The brides were given the opportunity to pick out a wedding dress for the wedding ceremony that they collectively held at a chapel in Honolulu.

“Not only were the participants not able to hold a proper wedding when they first got married, but they have been married to each other for at least seven years and up to more than 15 years. As to reflect the latest trend, this corner has been prepared as a sort of a remind wedding,” said Choi Jun-seok, manager of Hana Tour’s CSR team. In Korea, vow renewal ceremonies - which are growing in popularity - are called remind weddings.

On the fourth day of the trip, the team flew to Kauai, the fourth-largest island in Hawaii that boasts the stunning natural scenery as seen in movies such as “Jurassic Park.”

The couples enjoyed the views of Waimea Canyon, dubbed the Pacific Ocean’s Grand Canyon, and Kalalau Lookout. Later in the evening, they had a chance to go snorkeling at Poipu Beach on the island’s southern coast.

“The snorkeling part was the most memorable activity during this trip,” Bang said before heading back home to Korea.

“It was genuinely a chance to get away from reality and just be with nature. Fish, water, seals and everything,” she added.

As the trip neared its end, it turned out that being compensated for the missed experiences of wedding and honeymoon - which was what each couple had in mind when they first set out - had opened the door to the possibility of more travel someday.

“I realized that I was just a babe in the woods, ” said Choi, Bang’s husband. “For real, I never knew what kind of world was out there besides my own neighborhood. I mean how could I have imagined it while working inside a factory and sniffling in cold weather that this warm country could exist at the same time?”

“This will probably be my first and last time to visit Hawaii,” he continued. “Now that I have seen this warm and amazing place, I want to go back and work harder so that my children can see this big world, too.”

In addition to that, the couples found they were filled with new hope and energy from their time spent relaxing on the sunny island.

Lee also said that with his newfound positive energy, he believes he will be able to start fresh once he gets back to Korea, finding a new direction in his career and being a more devoted husband.

“Going on a trip abroad is about so much more than just sightseeing at tourist destinations,” said Lee Sang-jin, debuty general manager of Hana Tour’s CSR team.

“We are approaching the matter more in depth, so we can get rid of the weeds growing in their minds and plant a tree there so no more weeds can grow. These married couples have experienced a different culture. We hope that they will go back home and educate their children on a wider perspective.”