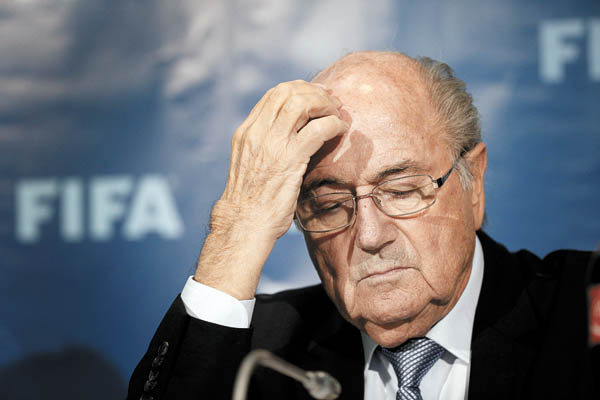 FIFA President Sepp Blatter gestures as he attends a news conference in Marrakech, Morocco, on Dec. 14, 2014. The FBI is investigating Blatter’s role in a kickbacks scandal that involved his predecessor as FIFA president, Joao Havelange, the BBC reported Sunday. [AP/NEWSIS]

GENEVA - Sepp Blatter is at risk again from the World Cup bribery scandal that tainted much of his FIFA presidency.

Switzerland’s justice ministry confirmed on Monday that American authorities formally asked for files in the ISL kickbacks case to aid their sprawling investigation of alleged racketeering by international soccer leaders.

The ISL marketing agency was found to have routinely bribed top sports officials, including Blatter’s predecessor Joao Havelange, before falling into criminal bankruptcy in 2001.

British broadcaster the BBC was set to air a program Monday alleging it had obtained a letter written by Havelange stating Blatter had “full knowledge” of kickback payments in the 1990s. Blatter was Havelange’s general secretary for 17 years until becoming president in 1998.

Blatter would not comment on the BBC’s claim, his spokesman Klaus Stoehlker told The Associated Press on Monday.

The ISL case sent FIFA into financial crisis, then dogged the governing body and Blatter through a criminal trial of six agency executives in 2008. A legal fight followed as FIFA tried to keep sealed the identity of officials named in a settlement deal to repay bribes.

Two years ago, FIFA finally declared the case closed after its ethics committee reviewed the case.

The ethics judgment confirmed three longtime executive committee members as bribe-takers: Havelange, who was FIFA president from 1974-1998, resigned as honorary president; his former son-in-law Ricardo Teixeira of Brazil, who had resigned a year earlier; and Nicolas Leoz of Paraguay, who resigned as president of the South American confederation CONMEBOL.

Criticizing Havelange and Teixeira for “morally and ethically reproachable” conduct, the ethics ruling of April 2013 also noted that commercial bribery was not illegal in Switzerland in the 1990s.

And Blatter’s behavior over the years did not amount to “any criminal or ethical misconduct,” ethics judge Joachim Eckert wrote.

Blatter had been merely “clumsy,” Eckert said, when in March 1997 he sent back a payment of 1.5 million Swiss francs (then $1 million) which arrived at FIFA for Havelange from ISL.

Being cleared of misconduct was a relief to the FIFA president, FIFA secretary general Jerome Valcke told the AP days after the ruling was published. The name ISL that was “tattooed on his forehead” for more than a decade was washed away from Blatter by the ethics panel’s summary, Valcke said in May 2013 in Kuala Lumpur, Malaysia.

Now, a scandal that is part of FIFA lore has been revived while Blatter is already suspended from office. He faces a possible life ban from Eckert this month in a separate case of alleged financial wrongdoing with FIFA vice president Michel Platini that is part of a Swiss criminal proceeding.

While Blatter’s conduct in the ISL case broke no Swiss laws, it is unclear if U.S. prosecutors could seek to show he has passively let corruption flourish.

“It must be questioned, however,” Eckert wrote, “whether President Blatter knew or should have known over the years before the bankruptcy of ISL that ISL had made payments [bribes] to other FIFA officials.” AP