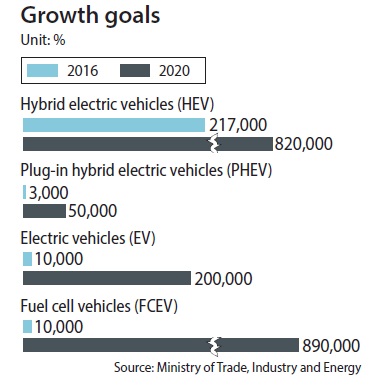 The government unveiled plans to spend 150 billion won ($127 million) over the next five years to further develop hydrogen-powered vehicles and will also offer additional subsidies for buyers of eco-friendly cars, as part of efforts to slash prices on low-emission models 40 percent by 2020.

The Ministry of Trade, Industry and Energy reported the news as part of its five-year plan at a presidential Cabinet meeting, where it was confirmed on Tuesday.

Hydrogen-powered cars have been commercialized by only a few global automakers, including Hyundai Motor and Toyota. Hyundai was the first to mass produce such a vehicle, the Tucson ix Fuel Cell, in 2013. But it was out of reach for most consumers with its price tag of nearly 100 million won.

Hyundai has since lowered the price to 85 million won, but the model has only sold 390 units as of October due to both its steep price and a lack of fueling infrastructure.

The Trade Ministry’s five-year plan aims to slash the price of the model to as low as 50 million won by 2020 through investments in 150 R&D projects to develop more durable and efficient fuel cells, hydrogen-supplying parts and filaments for batteries.

The investment will also go towards doubling battery capacity and enhancing the efficiency of the cooling and heating systems for electric vehicles, both of which will help future models run for longer distances.

Through such initiatives, the government hopes to see some 1.08 million eco-friendly cars sold in Korea - including hybrids, electric vehicles and hydrogen-powered cars - and have them account for 20 percent of the total passenger cars in Korea by 2020.

To meet the goal, the government will begin offering subsidies to encourage more car buyers to make eco-friendly choices. Next year, a subsidy of 27.5 million won will be given to each buyer of a hydrogen-powered car. Buyers of electric cars will get 12 million won, and buyers of hybrids will get 1 million won.

The government hopes this plan will encourage the Korean auto industry to foster new growth engines and help Korea meet the carbon reduction goals it has promised to the international community. The new plan is expected to reduce carbon emissions by 3.8 million tons in the next five years, the Trade Ministry said.

“The government expects to see a new export market worth as much as 18 trillion won and create some 90,000 new jobs by fostering our capabilities in eco-friendly automobiles, materials and parts,” said Moon Seung-wook, head of the system industry policy division at the Trade Ministry. “These cars will account for nearly half of the total global auto market, due to strengthening global environmental regulations and advancements in technology.”