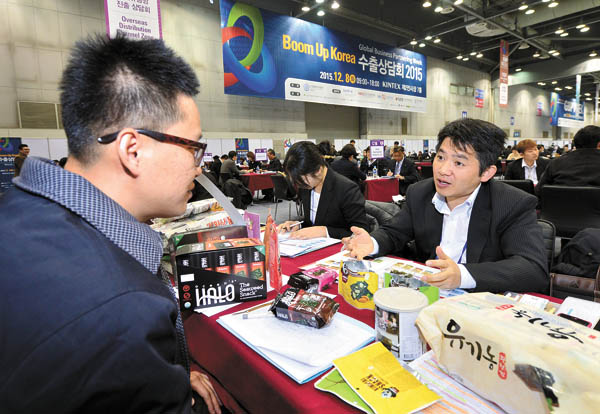 Jin Heung Brake is a small auto parts maker in Pocheon, Gyeonggi, which had annual sales of about 6 billion won ($5.1 million) this year exporting car brakes and brake pads to the Middle East, Russia and Latin America.

But the company is expecting a major surge of more than 70 percent in new business to Jordan next year after a meeting that sparked an export contract with the business development manager from AutoExcellence, a $20 million Middle East-based auto parts retailer that operates in Jordan and Palestine.

Jin Heung met the company at a business meeting hosted by the Korean Trade-Investment Promotion Agency (Kotra) and sealed a memorandum of understanding worth $500,000 to supply brakes to Jordan, Korea’s largest market for used cars. More than 90 percent of used cars running on the streets of the country’s capital of Amman are Korean cars, such as Hyundai and Kia.

The Ministry of Trade, Industry and Energy and Kotra held “Boom Up Korea 2015” export business sessions at Kintex in Goyang, Gyeonggi, on Tuesday.

The event is part of measures by the Trade Ministry after October’s monthly exports plunged nearly 16 percent, the largest drop since the global financial meltdown in 2009.

“As the chief of a state-run export promotion institution, I couldn’t just sit and wait anymore until things got better,” Kotra CEO Kim Jae-hong said. “We will do our best to make as many new contracts as we can by inputting all of Kotra’s possible resources and capabilities.”

On Tuesday, some 450 foreign companies were asked to find partners among some 1,450 Korean small manufacturers. Fifty-nine contracts worth $10.7 million were completed on Tuesday, while 116 new memoranda of understanding worth $118.3 million were made.

Many of the buyers came from countries which are part of new free trade agreements with Korea.