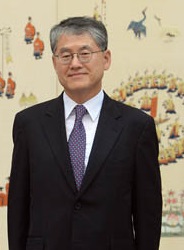 Ambassador Choi Kyong-lim was elected president of the United Nations Human Rights Council (UNHRC) on Monday in Geneva, the first time a South Korean has been chosen for the position.

Choi, South Korea’s permanent representative at the United Nations Office at Geneva, was elected at a board meeting of the council and replaces Germany’s Joachim Rucker as UNHRC president. He will serve a one-year term starting Jan. 1.

The 47-member council was established in 2006, with seats allocated based on geographical distribution; chairs rotate by each of five regional groups: the Asia-Pacific, Africa, the Americas, Western Europe and Eastern Europe. South Korea is the second nation in the Asia-Pacific to hold the UNHRC presidency after Sihasak Phuangketkeow of Thailand in 2011.

This also marks the first time a Korean has headed an international human rights organization, according to the Ministry of Foreign Affairs.

“This is a reflection that the international community regards Korea’s achievements in democracy and the expansion of human rights,” said Cho June-hyuck, the spokesman for the Korean Foreign Ministry, on Tuesday. “As well as our contributions to improving human rights globally over the past 10 years, during which we have served as a member-state of the council three times.”

South Korea will begin its fourth three-year term on the council from 2016 to 2018. The UNHRC was behind the establishment in March 2013 of the commission of inquiry into North Korea’s human rights record, which produced the landmark 2014 report recommending that the UN Security Council refer North Korean leaders responsible for perpetuating crimes against humanity to the International Criminal Court. The UN General Assembly heeded the recommendations in the report and at the end of last year passed a strongly worded resolution concerning the grave human rights violations in North Korea.

As president-elect, Choi noted that next year marks the 10th anniversary of the council. “In its first 10 years, the Council has accomplished a lot,” Choi said upon his election. “It has established the framework of standards and mechanisms to promote and protect human rights. Now is the time to put it into real effect.”

He continued that there are many challenges ahead, including issues of immediate concern like terrorism, climate change and migration, which can “bring with them a host of new and complex human rights considerations that cannot be overlooked.”

A career diplomat for more than 30 years, Choi previously served as the Korean ambassador to Brazil, the Foreign Ministry’s chief negotiator for free trade agreements and a deputy minister of trade under the Ministry of Trade, Industry and Energy.

“Our work is important to many people, in particular the many victims of human rights violations and abuses, the many oppressed, the many poor and the many suffering from conflict, crisis and terror,” outgoing UNHRC President Rucker said in his farewell address.

“Turning now to my successor,” he added, “I am convinced that under his leadership, the council will further advance human rights promotion and protection. I wish the next president every success in fulfilling this very rewarding task as president of the Human Rights Council.”