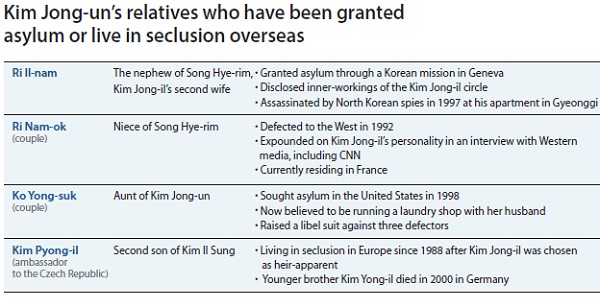 News reports last week regarding the defamation suit raised by the aunt of North Korean leader Kim Jong-un has since cast attention on other members of the Kim dynasty who have defected to the West.

Ko Yong-suk, the younger sister of Kim’s mother Ko Yong-hui, hired a local law firm last week to file suit against three North Korean defectors alleged to have spread what she referred to as groundless rumors about her and her husband.

The couple defected to the United States in 1998.

Reports on the lawsuit shined a light on Ko and her husband Ri Gang, who settled in the United States under the Witness Protection Program. The couple’s whereabouts and most information related to them had long been a mystery to South Korean authorities until Ko’s legal representative, Kang Yong-seok, issued a press release detailing the case.

Since then, more information about the pair has begun to emerge.

One source who specializes in North Korean affairs told the JoongAng Ilbo that Ko and her husband were running a laundry service in an American town with a large Korean population.

It is not clear whether the lawsuit was driven partly by the couple’s financial state.

Ko was known to have served as a caregiver for North Korean leader Kim Jong-un and his younger sister Kim Yo-jong while they attended boarding school in Switzerland before she and her husband were brought to the United States.

Ko and Ri sought asylum at the U.S. Embassy in Switzerland, where U.S. authorities quickly spirited them away without informing South Korean authorities.

They were sent to the United States via a base in Frankfurt, Germany, a source told the JoongAng Ilbo in 2013. The couple reportedly chose to defect out of fear that their in-depth knowledge of the inner workings of the Pyongyang’s elite circle would eventually put their lives at risk.

According to multiple former intelligence agents and sources in a JoongAng Ilbo interview in 2013, Ko and Ri are receiving protection from U.S. authorities and underwent cosmetic surgery to conceal their identities.

Once settling in America, Ko and her husband faced in-depth questioning by U.S. authorities, who extracted a trove of information about North Korea’s ruling dynasty.

According to reports, the Central Intelligence Agency became aware of secret funds raised by former North Korean leader Kim Jong-il, worth $4 billion, based on information it received from the couple, and moved to freeze those assets, which were invested in foreign stock markets.

To stress legitimacy of its hereditary rule, the Kim family emphasizes what’s known as the Baekdu lineage, which the regime claims began with North Korean founder Kim Il Sung. Pyongyang claims Kim Il Sung and his son, Kim Jong-il, who succeeded his father upon his death in 1994, were born on Mount Baekdu, the highest peak on the Korean Peninsula, and promotes Kim Jong-un as the continuation of the bloodline.

If they were to become known, the series of similar defections among Pyongyang’s leading family could potentially raise suspicions in North Korea over the country’s ruling dynasty and its grip on state affairs.

Chang Song-gil, the former North Korean ambassador to Egypt who was granted asylum in the United States after presenting classified information about the reclusive state’s nuclear program and missile sales to Iran and Syria, is said to be running a convenience store in the United States with his wife.

And Song Hye-rang, the older sister of Song Hye-rim, Kim Jong-il’s second wife who gave birth to Kim Jong-nam, reportedly defected to France with her daughter and son-in-law.

Her son, Ri Il-nam, who later changed his name to Yi Han-yong, also settled in South Korea after seeking asylum.

He later appeared on television and published a book in South Korea detailing the excessive indulgence of the Kim family, and was killed by North Korean operatives in 1997.

Kim Jong-nam, the oldest son of the late Kim Jong-il, is also known to move frequently since losing the fight for succession to Kim Jong-un.