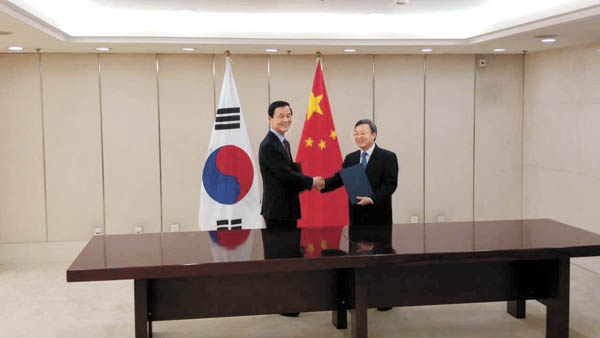 Kim Jang-soo, the Seoul’s ambassador to China,left, and Wang Shouwen, China’s vice minister of commerce, exchanged official letter on FTA on Wednesday in Beijing. [MINISTRY OF TRADE, INDUSTRY AND ENERGY]

Korea’s trade authority is urging local exporters to take full advantage of the tariff reductions that come into force in 10 days, after the signing of the free trade pacts with China and New Zealand.

The Free Trade Agreements (FTAs) both go in effect on Dec. 20, the Ministry of Trade, Industry and Energy said on Wednesday.

The historic partnership begins 11 years after Korea and China first discussed a FTA, and nine years after discussions were opened with New Zealand.

Kim Jang-soo, Seoul’s ambassador to Beijing, and Wang Shouwen, vice minister of commerce of the People’s Republic of China, exchanged government letters to confirm the date on Wednesday local time in Beijing. Kim Hae-yong, the ambassador to New Zealand, exchanged the letter with Martin Harvey, the chief negotiator of the FTA at the Ministry of Foreign Affairs and Trade, in Wellington.

“Korea and China have steadily discussed ways to get the FTA to go into effect before the year’s end, as the two presidents reached a consensus at a summit held in October,” said the Korean Trade Ministry. “The two countries completed domestic procedures as an exceptional case, to meet the presidents’ hopes.”

Under the conditions of the deal, Korea will be able to export some 958 products -- including crude oil, naphtha, hot rolled sheets and memory chips -- to China with zero-tariff by the end of the year. Some 4,207 products, worth nearly 92 percent of Korean exports to New Zealand in dollar figure, will be sold immediately with zero tariff. These products include automobiles, televisions, mobile phones, tires, washing machines and crude oil.

Starting on Jan. 1, 2016, Korea can export more than 3,000 products to China with slightly lowered tariffs, which are scheduled to gradually decrease further every year.

The agreement allows for tariff reductions with China to continue for 20 years, while New Zealand tariffs will run for seven years.

The bilateral free trade agreement with China is forecast to help Korea’s gross domestic product grow an additional 0.96 percent after 10 years, while New Zealand help by an estimated 0.03 percent.

Korean automobile, auto parts, home appliances and electronics makers are expected to be the largest winners from the FTA with New Zealand.

But many of the products on the tariff-free list with China are already exported with low or zero tariffs. Local trade experts say that Korean service industries, including law firms, engineering, environment and entertainment sectors, will be the biggest winners, as the FTA allows easier rules to enter the Chinese domestic market.

No date has yet been set for the Korea-Vietnam FTA, which was also ratified on Nov. 30, to take effect.