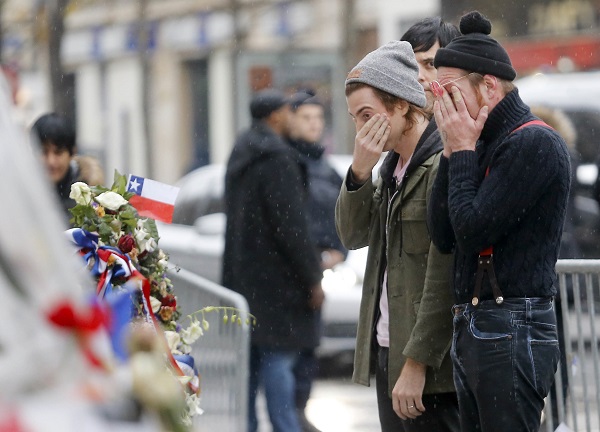 Members of the band Eagles of Death Metal, Jesse Hughes, right, and Julian Dorio pay their respects on Tuesday to 89 victims who died in a Nov. 13 attack at the Bataclan concert hall in Paris. Members of the California rock band Eagles of Death Metal are back at the ravaged Paris theater where they survived a massacre by Islamic extremist suicide bombers. [AP/NEWSIS]

PARIS - Members of the California rock band Eagles of Death Metal on Tuesday revisited the ravaged Paris theater where they survived a massacre by Islamic extremist suicide bombers.

Solemn and silent, they came to the now-shuttered Bataclan theater in eastern Paris, whose facade has become a shrine to the 89 people killed inside. Band members laid flowers at the site under a persistent December rain, some embracing as they stared at the wreaths, notes and banners heaped in mourning and tribute.

Singer Jesse Hughes covered his face as he paced pack and forth. Drummer Julian Dorio wiped away tears.

On that fateful Friday night, the band members dispersed to escape the carnage, one running upstairs, others slipping out a side door. They all ended up at the police station.

Drummer Julien Dorio said in an emotional interview with Vice and HBO that he “bailed off my stool’’ with the initial shots.

“I saw two guys out front, and that might be the most awful thing ever, is them relentlessly shooting into the audience,’’ he said.

Co-founder Hughes said in the interview that he wants the group to return to the Bataclan when the concert venue reopens.

The band made a surprise return to Paris and performed with U2 on Monday night, their first onstage appearance since the Nov. 13 attacks that killed 130 people overall in Paris.

U2 were playing the last of four concerts in Paris, two of which had been postponed when France announced a state of emergency following the attacks.

U2 frontman Bono told the audience they said he wanted to introduce “some people whose lives will forever be a part of this city of Paris. These are our brothers. Our fellow troubadours. They were robbed of their stage three weeks ago, and we would like to offer them ours tonight.’’

The two bands then played the Patti Smith song “People Have the Power.’’

The other co-founder of Eagles of Death Metal, Joshua Homme, not present in Paris on the fateful night, said in the Vice interview that the band was struck with the “shared heroism’’ of Parisians, as injured fans helped each other and others came from their homes to help.

On Monday night, Hughes told U2 and the crowd, “We love you too, so much for giving us this opportunity. I look around and what do I see, nos amis, our friends. I f---ing love you guys so hard, and I will never stop rocking and rolling.’’