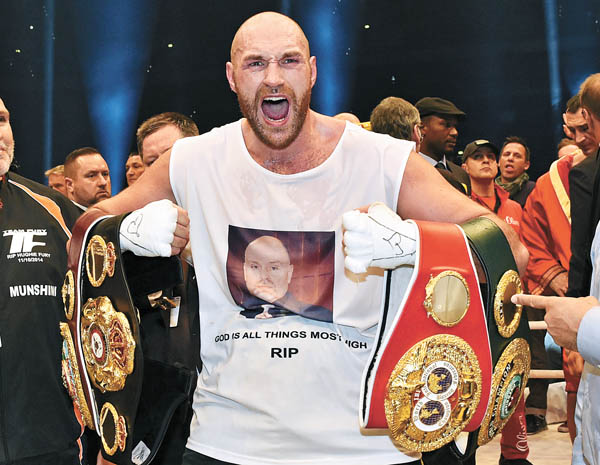 MANCHESTER, England - World heavyweight champion Tyson Fury is being investigated by police following the outspoken boxer’s comments about homosexuality, amid media reports he has been stripped of his IBF title.

Greater Manchester Police said they have received a report of a “hate crime” regarding Fury’s comments, which were published in a newspaper interview before his victory over Wladimir Klitschko in a heavyweight title fight on Nov. 28.

Fury, who is fiercely religious, said that among the things that need to happen “before the devil comes home ... is homosexuality being legal in countries.”

“Greater Manchester Police take every allegation of hate crime extremely seriously,” the force said, “and we will be attending the victim’s address to take a statement in due course.”

The BBC reported late on Tuesday that the International Boxing Federation has stripped Fury of his title less than two weeks after winning it, quoting Lindsey Tucker, championships chairman at the IBF, as saying “It’s true he’s been stripped of his IBF belt.”

?Fury’s profile has soared since his shock win over Klitschko to capture the WBA, IBF and WBO belts. Controversial remarks that previously went under the radar are now being seized on and questioned because of the responsibility that comes with being heavyweight champion of the world.

Before the Klitschko fight, Fury also ranted about abortion, and said doping should be legalized in all sports to make it “fully fair.” He was fined 3,000 pounds (around $4,500) in 2012 for a foul-mouthed rant that included branding two fellow English boxers “gay lovers.” AP