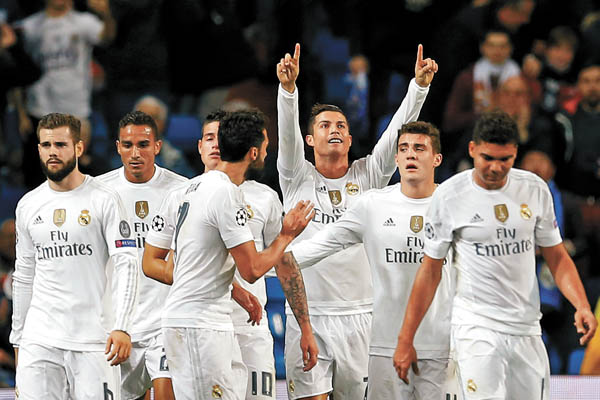 Real Madrid’s Cristiano Ronaldo, center right, raises his arms in celebration after his third goal during the UEFA Champions League Group A match against Malmo at the Santiago Bernabeu stadium in Madrid, Tuesday. [AP/NEWSIS]

MADRID - Cristiano Ronaldo on Tuesday dismissed rumors that he wants to leave Real Madrid and said coach Rafa Benitez is doing a good job at the club.

Ronaldo spoke after scoring four goals in Madrid’s 8-0 rout of Malmo, when he became the first player to score 10 goals or more in the group stage of the Champions League. He netted 11 goals in six games, surpassing the nine scored by Luiz Adriano with Shakhtar Donetsk last season. Ronaldo also scored nine times in the 2013-14 season.

The striker says he is happy and will stay with Real Madrid despite widespread reports that he is negotiating a transfer to Paris Saint-Germain.

“It’s speculation, it happens every year,” Ronaldo said. “People should be used to this by now. But this club has helped me greatly since I’ve arrived and I’m very happy here.”

He said his brief sideline meeting with PSG coach Laurent Blanc during a recent match at the Santiago Bernabeu Stadium didn’t mean anything.

“What happened with Blanc is simple,” Ronaldo said. “If somebody treats you well, you talk to that person. If someone from Chelsea, Manchester or Barcelona is nice to me, I’ll talk to that person. Obviously, it means nothing. I have a contract with Real Madrid and I will stay.”

Ronaldo hadn’t talked much publicly since Real Madrid became engulfed in a crisis following a humiliating 4-0 home loss to Barcelona and an embarrassing disqualification in the Copa del Rey because of an ineligible player.

Ronaldo said “it’s normal” for a club such as Real Madrid “to be criticized when things go wrong,” and expressed his support to coach Benitez, who has been constantly jeered by fans at the Bernabeu.

“He is doing a good job, still adapting to Real Madrid,” Ronaldo said. “You need to give him time. I think he is doing things the right way. I have a good relationship with him, as do all other players.”

Ronaldo has already scored 21 goals in 20 games with Real Madrid this season. His previous Champions League goals this year came with a hat trick against Shakhtar Donetsk at home, and two-goal strikes in away victories at Malmo and Shakhtar. He was held scoreless in the two games against PSG.

Real Madrid won Group A and easily advanced to the competition’s knockout stage. If finished three points in front of PSG. AP