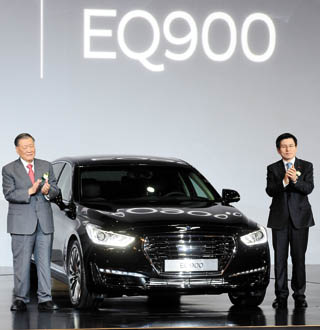 It took about 20 years for Toyota’s Lexus to become one of the world’s leading luxury auto brands. Can Hyundai Motor do the same with its ambitious new Genesis brand any sooner?

That question was on everyone’s mind as Hyundai unveiled the new brand’s flagship EQ900 sedan at the Grand Hyatt Hotel in central Seoul on Wednesday.

“The EQ900 is a premium sedan that targets the global market,” Hyundai Motor Group Chairman Chung Mong-koo said in his welcoming speech. “It will compete with the world’s most famous vehicles as it is developed with Hyundai’s highest-end automotive technologies, and we have put our best effort into product quality management. Hyundai Motor Group will also continue trying to improve its brand value and working on inventing industry-leading auto technologies as part of our efforts to provide new growth engines.” 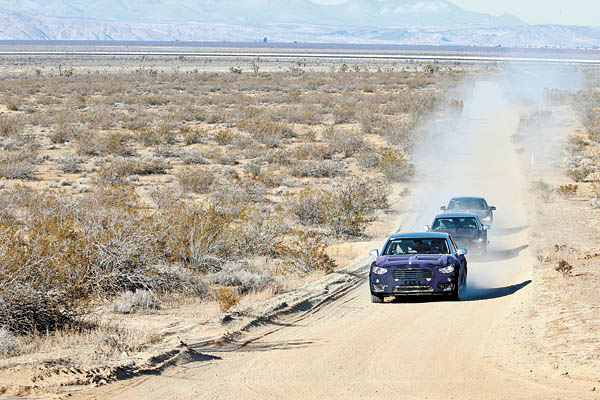 The Genesis EQ900 sedan in the middle of an off-road test at the California Proving Grounds in California in November. [HYUNDAI MOTOR]

The company has big ambitions for the new vehicle, which it hopes will draw back local consumers who have fallen for sedans by luxury brands like Mercedes-Benz, Lexus and BMW.

“We’re not sure yet, but we expect the annual sales for the EQ900 will be around 15,000 units in Korea,” Kwak Jin, an executive at Hyundai, said.

The automaker has made a strong start, receiving over 10,000 pre-orders even before the car was unveiled. In comparison, a total 9,623 Benz S-Classes have been sold through November.

At the event, the automaker also unveiled its first autonomous driving system designed for highways, called Highway Driving Assist (HDA). HDA introduces features like Advanced Smart Cruise Control and Lane Keeping Assist System, which automatically keeps a safe distance between vehicles and adjusts speed according to speed limits. It also adds Smart Blind Spot Detection, a system that helps a driver avoid collisions with vehicles in his or her blind spot.

The automaker also introduced its new GENESIS Adaptive Control Suspension, which it has been testing at its California Proving Grounds (CPG) in the United States’ Mojave Desert.

In the CPG, where road temperatures top 50 degrees Celsius (122 degrees Fahrenheit) during the summer, 20 EQ900s were driven a total of 3.2 million kilometers (2 million miles) - the equivalent of driving the circumference of the earth about 80 times. Sections included a 10.3 kilometer-long high-speed area, which was driven at 200 kilometers per hour, along with 11 other areas that simulate highways, off-road driving and winding roads. The tests, which checked the cars’ durability and quality of the ride, have been ongoing since January.

Hyundai has been testing the EQ900 so rigorously because it sees the first Genesis sedan as crucial to expanding its share of the luxury car market, in which the automaker has been struggling.

According to Hyundai, the luxury market accounts for about 10 percent of the world’s auto sales, and the market has been growing by an average 10.5 percent per year since 2010.

Last year, about 8.33 million luxury cars were sold around the world.

The success of the EQ900 is also important for Genesis, which has four additional G brand cars planned through 2020.

But the question remains: How can Genesis become recognized as a luxury brand along the lines of Lexus and Mercedes-Benz? According to Hyundai, it will first test its VIP membership service Honors G, which is only for EQ900 owners. The company said the service includes Honors G Intelligent Car Care, which offers free car services for the first five years.

“Making a decent car is different from developing a premium brand,” Yu Ji-soo, former chairman of the Korean Academy of Motor Industry, said. “Hyundai needs to establish separate strategies to beef up the Genesis.”