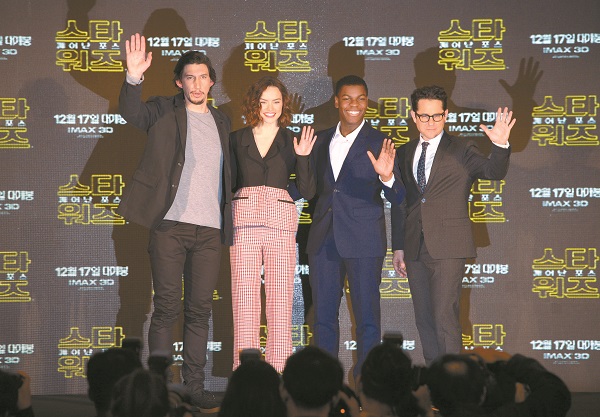 Director J.J. Abrams, far right, and the cast of the upcoming “Star Wars: The Force Awakens” - from left, Adam Driver, Daisy Ridley and John Boyega - wave as they pose for photos at a press conference on Wednesday in Seoul. [NEWSIS]

The much-anticipated “Star Wars: The Force Awakens,” the seventh installment of the famed space opera, will resonate both with the older and younger generations of moviegoers, according to its director, J.J. Abrams.

Resurrecting the legendary sci-fi series for the first time in 10 years, Abrams emphasized that his main focus in making the new episode was implementing elements that would appeal to the franchise’s loyal fans as well as newcomers.

“I knew that this would be the first Star Wars movie for a lot of people and it was important to make them love the new characters,” said the director behind “Star Trek” (2009), “Mission Impossible 3” (2006) and more during a press conference on Wednesday in Seoul.

He was joined by the cast of the new movie: Daisy Ridley, John Boyega and Adam Driver.

“Because [the franchise] was created so long ago, it was our responsibility to go backward in order to go forward, to embrace what has come before, the feeling of the amazing place and universe that George Lucas has created. [And] use that DNA to tell a new story,” he said.

To that extent, the original stars of the decades-old franchise were a vital part of that “DNA.”

“For the older generation, we have characters like Han Solo played brilliantly as ever by Harrison Ford and Leia played by Carrie Fisher,” he explained, while hoping for the younger generation could relate to the newly added main characters named Rey, Finn and Kylo, played by Ridley, Boyega and Driver.

“The most fun I had in this filming was to watch scenes between the characters that I have known since I was 10 years old and characters that I came up with from scratch and to see those two worlds not just collide but also do so spectacularly,” he said.

Another element that has been maintained and is imbuing life to the franchise is the time-trenscending story about family.

“In ‘Star Wars,’ whether it is a literal relationship … it is also about the family that you make. It’s about loyalty, friendship and sacrifice,” he said.

The new cast, all of whom are at the start of their film careers, showed excitement about joining the big-budget franchise for the first time. 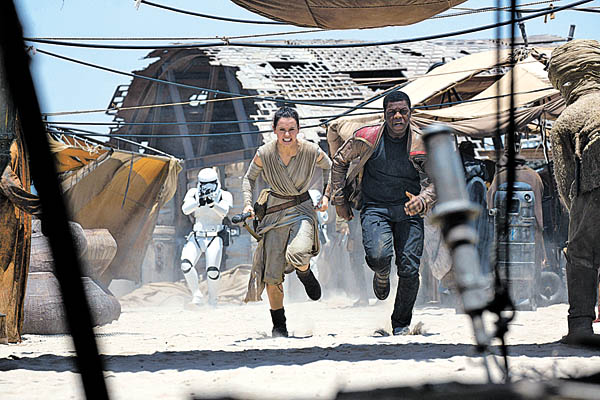 “The size of it was initially interesting and daunting. Breaking up into pieces and making those pieces as real as possible was what I did,” said Driver, who starred in “We Are Young” (2014) and “Francis Ha” (2012).

Ridley, who joined the “Star Wars” cast as a rare female member, said her character will be much different from that of Princess Leia.

“It is exciting to be compared to Princess Leia because she has paved the way as a bad ass woman,” she explained. “But [Rey] doesn’t come from royalty. She is just a young woman trying to make her way with no help and no support.”

After starting out simply as “Star Wars” in 1977 with Lucas at the helm, the film - which was later retitled to “Star Wars: Episode 4 ? A New Hope” - instantly gained an immense following worldwide with its construction of a believable sci-fi world and likeable characters.

For the next 30 years or so, the franchise gave birth to five more installments including prequels and sequels, with parts 1, 2, 3 and 4 directed by Lucas.

“The Force Awakens,” which is slated to open nationwide in Korea on Dec. 17, is the first episode in another set of trilogies and two spinoffs that are planned by Disney through 2019.