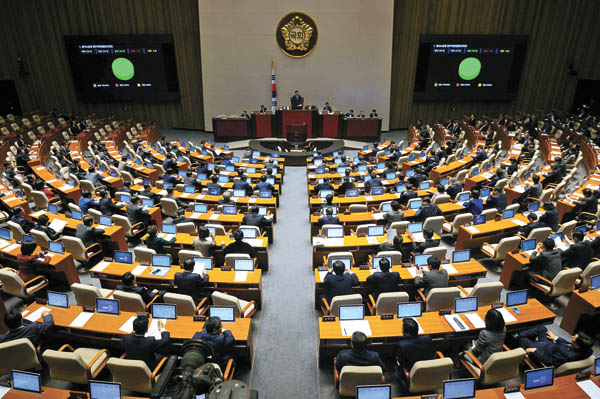 The legislature holds the voting session on the last day of the last regular session of the 19th National Assembly on Wednesday. [NEWSIS]

The last regular session of the 19th National Assembly ended on Wednesday with the worst-ever performance, leaving more than 11,000 bills to go down the drain without a vote.

The ruling and opposition parties managed to open a voting session at 4:22 p.m. and introduced 246 bills en masse. That would give lawmakers two minutes for each bill to debate and vote if they work tirelessly until midnight. Even if the lawmakers managed to approve all 246 bills by midnight, nearly 11,300 bills would still be labeled pending as they never advanced to a voting session and will automatically expire.

Most of the bills presented to the voting session on Wednesday were noncontroversial. Economic bills, including a basic act for development of Korea’s services industries, a package of bills to overhaul the rigid labor market and a counterterrorism bill were not presented.

Wednesday was the final day in the last 100-day regular session of the 19th National Assembly, whose term expires on May 29, 2016.

According to the National Assembly’s Information System, 11,505 bills were still waiting for a vote as of 4 p.m. Wednesday. The bills that didn’t make it to a voting session will automatically begin the process of being nulled. Lawmakers could still deliberate and pass them by holding extra voting sessions through the end of their term, but that prospect was dim.

Earlier Wednesday, the ruling Saenuri Party and the main opposition New Politics Alliance for Democracy (NPAD) held a negotiation to discuss the Saenuri’s demand to start an extra session today. The NPAD refused.

National Assembly Speaker Chung Ui-hwa hosted the negotiation between the floor leaders of the two parties in the morning, but no agreement was made. At the meeting, Chung asked NPAD floor leader Rep. Lee Jong-kul to accept the Saenuri Party’s request to hold the extra session, but Lee refused.

Partisan deadlock also led to a plummeting rate of passage of laws.

The 19th National Assembly set a new record. As of Wednesday morning, the passage rate was only 31.56 percent.

The Citizens United for a Better Society, a civic group that monitors the National Assembly, said lawmakers participated in legislative activities halfheartedly.

It said lawmakers had an average 91.3 percent attendance rate for the last regular session as of Dec. 2, but only 55.3 percent of the lawmakers actually stayed until the end of a voting session. Although there are 294 lawmakers in the 300-member National Assembly, only half of them actually sat through a session.

The 19th National Assembly also created yet another dubious record: it summoned the largest number of witnesses to grill during its audits of the government.

According to the Korea Economic Research Institute, the 16th National Assembly summoned 2,347 witnesses, giving each witness 27 minutes to testify on average. During the 19th National Assembly, 3,482 witnesses were summoned and testified an average of 16 minutes 2 seconds.

Although the ruling party submitted a bill in October to revise the law governing the audit to root out the practice, the bill is still pending at a standing committee and is likely to be discarded.

“Throughout the 19th National Assembly, the ruling and opposition parties wasted many days in political fights,” Lee Ok-nam, head of the political department of the Citizens United for Better Society, told the JoongAng Ilbo. “They will be remembered as lawmakers who failed to do their fundamental duty, which is legislate.”

President Park Geun-hye remained silent on Wednesday. Over the past month, Park made demands to the National Assembly to pass delayed economic bills before the regular session ended.

After Park issued her latest attack on the NPAD on Tuesday, its chairman, Moon Jae-in, said on Wednesday that her pressure was making the situation worse.

“Her disrespect of the National Assembly, her control of the ruling party and her threats to the opposition party went over the limit,” Moon said on Wednesday. “We cannot pass evil laws just because of Park’s angry scolding.”

Speculation grew on Wednesday that Park would make an address to the nation to criticize the legislature. Asked if the Blue House would make a statement if the economic bills were discarded without a vote, Jung Youn-kuk, Park’s spokesman, did not deny the possibility. “I cannot jump to a conclusion,” he said.