While Vonn, who is also honorary ambassador for the 2018 PyeongChang Olympic Winter Games, was showing her dominance at Lake Louise, Korean alpine skiers were about 130 kilometers (80 miles) away at Nakiska ski resort in Kananaskis for the Alpine Insurance FIS Downhill event.

Although it is a lower tier contest, three Korea national team members and six other reserved skiers were working hard to hopefully progress to Vonn’s level one day.

So far, Korea has been focusing on slalom or giant slalom which highlights turning and technical skills as skiers have to maneuver between poles or gates. In downhill, which is more about speeds of up to 140 kilometers an hour (87 miles per hour), Korea has had no Olympic competitor since now-retired Hur Seung-wook raced at the 1994 Winter Games in Lillehammer, Norway. 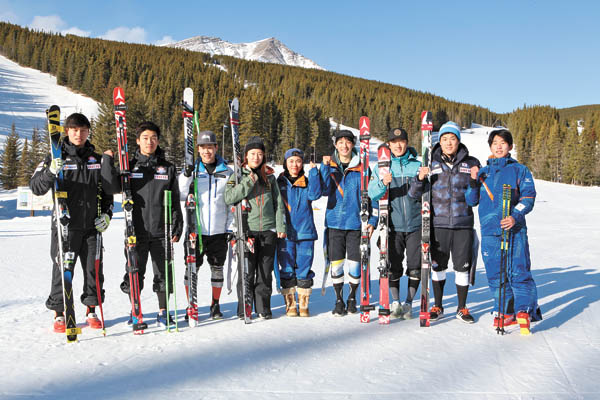 However, as the host of the 2018 Winter Games, the Korea Ski Association has focused on developing alpine skiers who can compete in fast skiing disciplines such as downhill or Super-G.

For the last four months, Korean skiers, who have focused on downhill or Super-G, have been training overseas in countries such as France, Chile, United States and Canada.

“I’ve never been away from home this long to train,” said Lee Hyun-ji who was the 2009 MVP of National Winter Sports Festival after sweeping four gold medals in alpine ski. “I’m learning the basics of speed alpine skiing disciplines step by step.”

The national team’s training ground, Nakiska ski resort, hosted the downhill event in the 1988 Calgary Winter Games. The difference of elevation here is 779 meters, while the slope length is 2,250 meters.

For Korean skiers, all of Nakiska’s courses are a new challenge because there is no downhill course in Korea. Jeongseon Alpine Centre is currently under construction and scheduled to open next year. The lack of a suitable course was the reason a downhill event wasn’t even included in the National Winter Sports Festival.

While skiers who compete in slalom or giant slalom events have suitable training slopes, downhill skiers have to find their own solution.

Nine members of the national team are training overseas because they know it is a rare opportunity, even if it means practicing through injury.

Before the Alpine Insurance FIS Downhill, Kim Seol-kyung and Kim Dong-woo tripped over a fence in training, while female skiers Lee Hyun-ji and Joo Sa-rang also injured their knee tripping over a snow bump.

However, they won’t give up. Training runs from 6 a.m. to 10 p.m., and skiers have to do their own maintenance on equipment.

“I was scared at first because I have never skied on a course with a big slope,” said Kim Seol-kyung who clocked 1 minute, 5.39 seconds, the best time among Koreans in the downhill event last week. “It feels like you are coming down after bungee jumping.”

In Super-G, which involves more turns than downhill, but still faster than giant slalom, Lee Hyun-ji finished third at 1:17.74.

“We are proud, because in Korea we are the only ones who can compete in these speedy ski events,” Lee said.

However, things may be looking up for the national team.

After Lotte Group Chairman Shin Dong-bin became the chief of the Korea Ski Association last November, the national team has had longer training overseas as funding has improved. Shin pledged he will support the team to the tune of 10 billion won ($8.46 million) by 2020. The team plans to boost staff, such as trainers and equipment managers.

“It will be sad if no Korean downhill skiers compete in the Winter Games held in their homeland,” said Kim Seol-kyung. “We will let the world know that there are Korean skiers in speed skiing.”