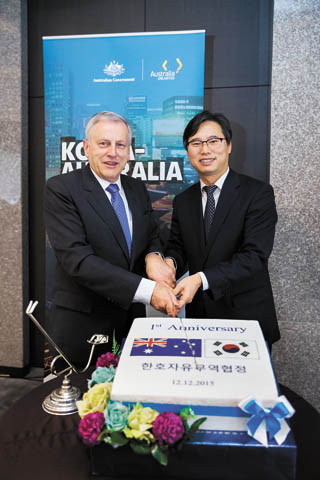 Australian Ambassador to Korea Bill Paterson, left, and Park Jin-kyu, director general of the trade policy bureau at the Korean Ministry of Trade, Industry and Energy, celebrate the anniversary of Kafta on Thursday. [AUSTRALIAN EMBASSY]

Education, tourism and legal services in Australia are the three sectors that Korea should take more advantage of in the year-old free trade agreement between the two countries.

Speaking at a press conference to mark the first anniversary of Kafta, Paterson emphasized that “in order to realize the full benefits of [free trade in the] services [sector], it is essential that both governments get the regulatory settings right.”

He called for the elimination of unnecessary regulations and said ensuring that a legal path is cleared for new entrants in the foreign service sector is crucial to attracting new businesses and investment.

Services trades accounted for only 7 percent of the total bilateral trade made in the past year, and Korea is still Australia’s 15th largest investor, the ambassador said.

So far, Mirae Asset Global Investments, Woori Bank and Korea Development Bank - which are working on or already have opened offices in Australia - are among the few local financiers taking advantage of Kafta, the embassy said. The National Pension Service, which invested 3 billion Australian dollars ($2 billion) on a joint infrastructure fund for major ports and power infrastructures, and Samsung C&T, which has been designing and building a Sydney-based port, are other examples.

Paterson said education, tourism and legal services are the three service sectors Korea should focus on. Cooperation with Australian legal service companies will help Korean firms expand to member countries of the British Commonwealth, he said.

Since Kafta took effect on Dec. 12, 2014, Korean exports to Australia stood at about $13.93 billion in the first 10 months of this year, down from $20.41 billion from the same period last year, according to the Korea International Trade Association (KITA). The drop was largely caused by tumbling prices in raw materials and the weakening Australian dollar against the U.S. dollar, said Je Hyun-jung, a researcher at KITA.

Korean automakers and auto parts makers were the largest beneficiaries of the bilateral pact, thanks to the immediate elimination of a 5 percent tariff, while the livestock and agricultural sectors were the biggest winners in Australia.