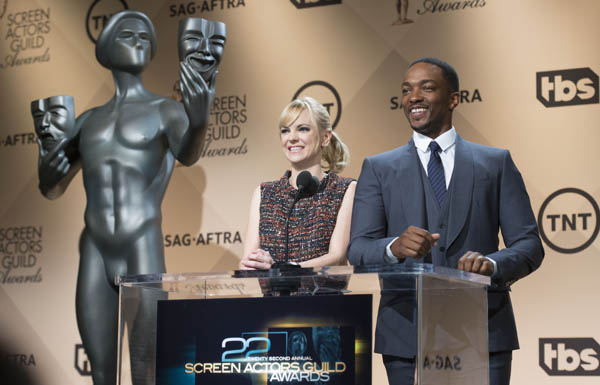 LOS ANGELES - Ensemble nominations for the Screen Actors Guild Awards highlight diversity in both film and television, including nods for “Beasts of No Nation,’’ “Straight Outta Compton’’ and “Orange is the New Black.’’

Yet, individual nominations, especially for movies, remained largely white - only adding to concerns that this will be yet another monochromatic awards season.

Idris Elba was nominated for best supporting actor in the child soldier drama “Beasts of No Nation’’ and is the sole individual minority nominee in the movie categories of the 22nd annual SAG nominations announced Wednesday.

Elba said in a statement that he was “floored’’ and “humbled’’ by the recognition.

“It goes without saying that my performance is shared with the tremendous actors I work with,’’ Elba wrote, congratulating his “Beasts’’ co-stars Abraham Attah and Kurt Egyiawan as well.

Elba was also nominated for his leading role in TV’s “Luther.’’

Hollywood’s lack of diversity has become of critical concern following last Oscar’s all-white acting slate. But while the predominantly black casts of both “Beasts’’ and “Straight Outta Compton’’ were recognized for their ensemble work, alongside “Trumbo,’’ “Spotlight’’ and “The Big Short,’’ individual acting nominations in most film categories exhibited a striking lack of diversity. Thursday’s Golden Globe nominations could bring more attention to the issue.

Though “Straight Outta Compton’’ was a box office and critical hit, its award season prospects were a big unknown. On Monday, the African-American Film Critics Association named the N.W.A drama their best of the year, but it’s been mostly overlooked by other critics’ awards.

Overall, there were more diverse individual nominees in television than film, thanks in part to the fact that TV divides nominees into comedy and drama, which provides more inclusion. In addition to Elba’s nod, other TV nominees included Queen Latifah for “Bessie,’’ Uzo Aduba for “Orange is the New Black’’ and Viola Davis for “How to Get Away With Murder.’’

The SAG nominations also helped bring a murky awards season into a bit better focus. Nominees are selected by separate movie and TV nominating panels, each comprised of more than 2,000 randomly selected SAG members, and the organization’s choices highlighted a few underdog performances.

Leading female performance nominees included Cate Blanchett (“Carol’’), Brie Larson (“Room’’) and Saoirse Ronan (“Brooklyn’’), all of whom have dominated awards buzz, but also Sarah Silverman for the depression indie “I Smile Back,’’ and Helen Mirren for ``Woman in Gold,’’ about an elderly Jewish woman looking to reclaim art once stolen by the Nazis. Mirren was also nominated for a supporting performance for “Trumbo.’’

“I am honestly in shock and just tickled pink that this happened,’’ said Silverman in a statement. “My first thought was that I can’t believe my Mom isn’t here to see this. I wish I believed she is somewhere seeing it. Maybe for today, I will.’’

In the supporting category, Christian Bale was nominated for “The Big Short,’’ Mark Rylance for the Cold War thriller “Bridge of Spies,’’ Michael Shannon for playing a predatory real estate agent in “99 Homes’’ and young star Jacob Tremblay for playing a child in captivity in “Room.’’

In a statement, Tremblay, 9, said that he was in Dubai with his family and they plan to celebrate with ice cream sundaes tonight.

Many members of the SAG movie panel also vote for the Academy Awards and as a result, the SAG nominees have traditionally served as a helpful indicator of potential Oscar acting nominees. “Spotlight’’ is also emerging as one of the top contenders this year, too. The critical favorite about the Boston Globe’s investigation into the Catholic Church’s sex abuse scandal should be a front-runner for best picture.

The 22nd annual Screen Actors Guild Awards will be broadcast live from Los Angeles on TNT and TBS on Jan. 30. AP