Samsung’s entry into car business is a bet on future

Samsung’s entry into car business is a bet on future 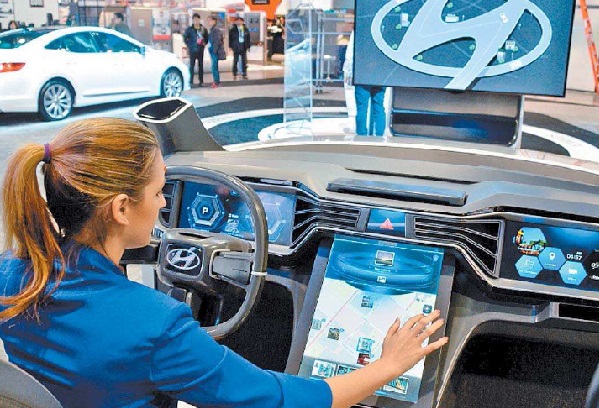 If one traces back the deliberate steps by Samsung scion Jay Y. Lee over the past five years, Samsung Electronics’ announced entry into the automotive sector on Wednesday does not come as a complete surprise.

As an outside director of Exor, the controlling shareholder of Fiat Chrysler Automobiles, the vice chairman of Samsung Electronics stayed in close contact with senior executives from global automakers Nissan Motor, Volkswagen, Toyota Motor and BMW, seeking business opportunities in private meetings.

The latest decision to supply parts for connected and self-driving cars signals that the heir apparent to Samsung Group Chairman Lee Kun-hee sees the business as an important fresh source of revenue for the electronics company in the same way that local rival LG Electronics embraced the vehicle component business two years ago.

“In the face of declining sales in key sectors such as smartphones, it would be irrational for Samsung not to set out to find a new growth engine,” Jeong Geun-ho, an analyst at Atlas Research & Consulting, said. 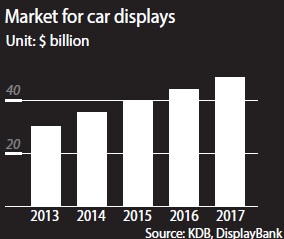 “Choosing the automotive parts sector is a strategic decision. The business is on pace for further growth with expectations for more advanced cars such as Internet-enabled, driverless cars,” the analyst continued, “And Samsung already has established resources and the basic technology to be used in the new division.”

The key question is whether Samsung Electronics intends to go beyond supplying parts and become an automobile manufacturer.

A spokesperson for the company made it clear on Thursday that the automotive business will be confined to vehicle parts.

In the beginning phase, the focus will be placed on information and entertainment solutions and eventually expand to other areas, pulling resources from different Samsung affiliates, according to Samsung Electronics in a statement.

Analysts agreed that the tech giant will likely focus on the parts business.

“Jumping into manufacturing smart cars could be risky because it requires expertise in both the hardware and software of vehicles and the systems to ensure safety, fields in which Samsung doesn’t have enough knowledge,”Jeong at Altas said.

Automobiles are a rare business that left deep scars on Samsung, which has been so successful in televisions, chips and smartphones. Samsung established a car unit called Samsung Motors in 1994 but later sold a controlling stake to French automaker Renault after suffering losses.

But recent dreams of more tech-driven cars such as self-driving vehicles - championed primarily by Tesla, Google and Apple - now present new opportunities. Samsung Electronics is expected to leverage its tech brain trust, including such diverse technologies as cameras, batteries, chips and displays. The potential parts to be embraced also include advanced semiconductors and sensors.

Given that the new automotive division will be overseen by its device solutions division rather than consumer electronics unit, analyst Lee Ka-geun of KB Investment & Securities said, “Samsung will start with infotainment solutions and then in the stable phase, steer the business to car semiconductors.”

Samsung Electronics and some Samsung affiliates recently made auto-related partnerships and investments.

Battery solutions manufacturer Samsung SDI also recently pulled resources together to focus on batteries for electric cars. The company completed a huge electric car battery factory in China and will invest an additional $600 million by 2020 in a bid to boost production and fulfill a sales target of $1 billion that year.

In 2014 alone, the Korean brand registered over 600 patents, compared to around 100 from some of its competitors, according to Forbes.

Samsung registered 3,094 auto-related patents between 1990 and 2014, and it has recently been focusing on battery and fuel cell technology.

Rival LG Electronics is already involved in vehicle components after acquiring in 2013 a 100 percent stake in V-ENS, an engineering firm under its affiliate LG CNS.

The new division has had a better-than-expected performance as the company posted 382.6 billion won ($323.9 million) in sales of vehicle components, beating market estimates.

After Samsung announced its entry into the smart car industry, news reports said Hyundai Motor is considering producing chips for cars on its own. According to executives of Hyundai Motor, it has planned to make chips and sensors necessary for autonomous driving and electronic vehicle operations, as part of its efforts to strengthen its competitiveness in the smart car business.

“We feel that it is necessary to make auto chips and sensors on our own in order to be a true leader in the industry of advanced autos,” an executive from Hyundai Motor said.

Hyundai said it isn’t considering producing semiconductors in its own plants as Samsung Electronics does. It said it will first focus on designing the parts and outsource the production work to a potential partner.

A few years earlier, Hyundai had a plan to apply its autonomous driving technologies in all of its mass-produced cars by 2020. As part of the process, Hyundai Motor Group established a chip design company, Hyundai Autron, in 2012 and decided to invest about 2 trillion won from this year to 2018. “We currently buy chips and sensors from partners, but we are working on developing such parts on our own since the number of electronic components being installed in cars is consistently increasing,” a spokesman for Hyundai said.

Such moves by the nation’s major groups show that the boundary between auto and IT industries is dissolving, and that the two Korean industries could collaborate to face off against smart car leaders such as Google and Apple.

In a symposium organized by the Ministry of Trade, Industry and Energy on Tuesday to share ideas about improving the nation’s competitiveness in the auto industry, Vice Minister Lee Kwan-sup said, “The auto industry accounts for 13 percent of the nation’s exports in manufacturing and accounts for 12 percent of the nation’s entire production. Local automakers and IT companies need to work together to strengthen overall competitiveness in the global market.”

Mercedes-Benz and BMW are working with Bosch and Germany’s Continental Automotive Systems, while Toyota is cooperating with Toshiba and Panasonic.