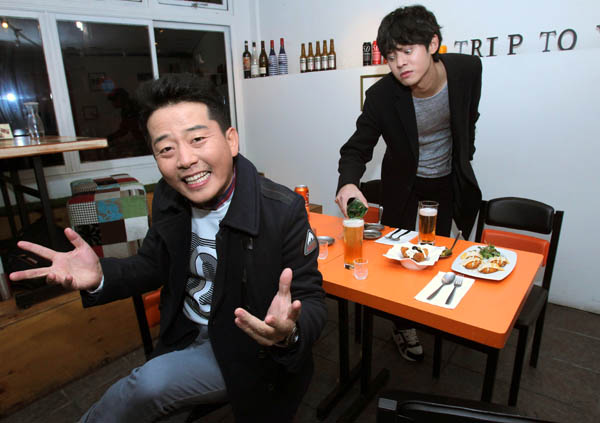 The popular reality show “1 Night 2 Days” has successfully managed to win back audience attention in its third season, contradicting doubts that surfaced from before its launch. In two years, the program has taken its members to practically every corner of Korea.

The program often ranked first or second in viewership ratings among shows that aired in the time slot of 4:50 p.m. on Sundays.

The show’s two cast members, comedian Kim Jun-ho and singer Jung Joon-young, said in a recent interview with Ilgan Sports, an affiliate of the Korea JoongAng Daily, that they felt they brought out the best in their audiences and elaborated on how two years on the show had shaped them and the program.

Q. How do you feel about reaching your two-year anniversary?

A. Kim: I like the saying, “You lose when you get nervous, you win when you get excited.” I’m always excited to go film the show. We have to be remembered [by the audience].

What would you attribute to the increase in ratings?

Kim: [Producer] Yu Ho-jin may look weak, but he has a leadership mind. Once, on a cold day, he tested the waters by going in himself. It’s not common for a producer to voluntarily do something like that, but he did. After that day, I had newfound respect for him. [Cast member] Cha Tae-hyun also did a lot. In the beginning, he invited us to his home and encouraged us to become close.

Your cast mate, Kim Ju-hyuk, recently decided to leave. Do you think that will change anything?

Jung: We did a shoot after he left, but we barely noticed he was gone. Filming went well. Would he be sad to hear this? But during the last day filming [with him], I almost burst into tears.

Kim: We should be fine, but it’s worrying that we don’t have an even number to do games. We need a new person to join, and it seems like the production staff has also been thinking a lot about that.

Do you have any ideas for a special episode?

Jung: I would want to film in a foreign country. But the plan dissolved twice [before]. I think people watch when programs take episodes overseas. It doesn’t matter where you go.

Was there any time you thought the production team played too mean a trick on you?

Jung: We assessed our ability to endure the cold weather in one episode that aired last month. We were in Seoul, but the filming day was so cold.

We ripped off our clothes and played games in a refrigerator. I thought I would freeze to death.

Kim: The worst is hiking since none of us like it. Going into the water only lasts for a few moments [so it’s better], since I really hate walking. I hate activities like hiking to welcome the fall season.

It’s almost the end of the year. Do you hope to be honored at an awards ceremony?

Kim: I got top honors two years ago, so I’m not really expecting anything. I want the other members to win one. There are so many people who have really worked hard [to make this program].