The government agency analyzed sales of Korean products on Alibaba’s Tmall from Nov. 11-20.

Although China’s IT startups like Xiaomi are rising as strong contenders against Korean businesses, Chinese still want Korean-made home appliances and portable IT gadgets, the report said. 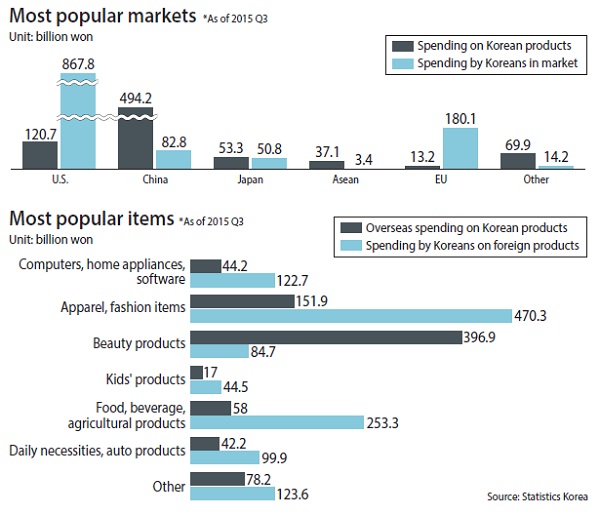 According to the agency’s statistics on online shopping, Korea exported 396.9 billion won ($336 million) in skin care products and cosmetics to other countries via the Internet as of the third quarter this year, which accounted for more than 50 percent of the total online exports of 788.5 billion won.

The Chinese were the largest customer group, who bought 494.2 billion won of Korean products online in total, followed by American and Japanese consumers.

The second best-selling Korean products were apparel and fashion items.

Conversely, the most popular products bought online by Korean consumers were clothing made in other countries. Koreans purchased 470.3 billion won of foreign-made apparel on overseas websites, accounting for about 39 percent of the country’s total online imports of 1.19 trillion won as of September.

The figure is only dated up to the third quarter and could further expand when including last month’s Black Friday sales.

China was the biggest buyer of Korean products, accounting for 62.7 percent, or 494.2 billion won, and up 164.9 percent year-on-year. The biggest market from which Korean consumers bought was the United States, which accounted for 72.4 percent, or 867.8 billion won.