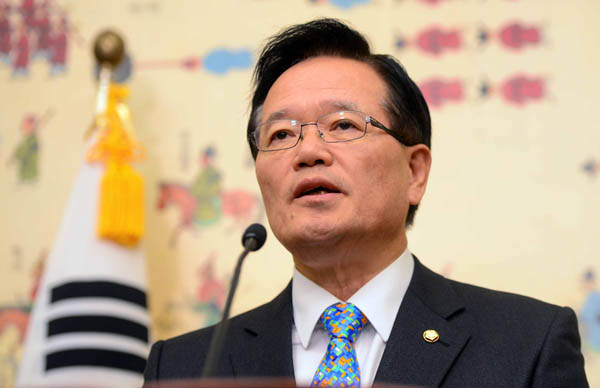 The National Assembly Thursday started an extraordinary session to process a mountain of delayed bills and redraw the electoral district map for the April general election.

But the ruling and opposition parties spent the first day of the month-long session at an impasse that prevented any legislative activity.

The last regular session of the 19th National Assembly ended Wednesday, with the rushed passage of 114 bills and three resolutions in a voting session that lasted three hours. Contentious bills including a package of five bills to overhaul the labor market and a bill to create a basic law for the development of the services sector were not introduced.

The extraordinary session started Thursday, but the ruling and opposition parties failed to agree on a legislative timetable for pending bills.

“I cannot hide my extremely bleak and sorry feeling today,” National Assembly Speaker Chung Ui-hwa said Thursday. “The people’s distrust and criticism of the National Assembly reached a new peak, and I share responsibility as its speaker.”

Chung said the 19th National Assembly demonstrated the limits of the current political system, with the ruling and opposition parties failing to process many bills due to conflicts in ideology and distrust.

“Bills intended to help the economy and the people’s livelihoods were held hostage to haggling,” Chung said.

“The issue of redistricting electoral constituencies must be concluded before Tuesday, when preliminary candidate registration will start,” said Chung. “The ruling and opposition parties’ leaderships must create a standard and submit it. Or else, I have to take action as the speaker.”

The amendment, designed to stop violent melees from breaking out when the majority party tried railroading bills through a vote, limits the speaker’s power to introduce a bill directly to a voting session without standing committee deliberations to when a natural disaster occurs; when a war or a national emergency occurs; or when the speaker reaches agreement with the opposition parties.

Chung said it is legally impossible to accept the ruling party’s demand to use his power as speaker to directly introduce several economic bills for voting, although the floor leaders of the ruling and opposition parties had agreed on Dec. 2 to vote on them before the end of the regular session.

The ruling Saenuri Party on Thursday condemned the main opposition New Politics Alliance for Democracy for obstructing legislative activities. “The bills are not to be taken hostage, a subject of negotiation, a bargaining chip or spoils,” Kim Moo-sung, Saenuri chairman said. “The standard of passing them must be whether they benefit the people and the country. The opposition party is objecting to them simply because the bills are the president’s pet projects.”

The NPAD said Thursday that President Park Geun-hye’s disrespect of the legislature brought about the crisis. “The National Assembly is not Park’s cabinet or secretariat, where only her loyalists serve,” Rep. Lee Jong-kul, NPAD floor leader, said.

Lee refused to cooperate with the Saenuri Party to negotiate a legislative timetable for the extra session, saying the session was unilaterally opened without the NPAD’s agreement.

Among the 114 bills approved Wednesday was a so-called Volkswagen law, in which a motor company will face a fine of up to 10 billion won for exaggerating fuel efficiency. A revision to the law governing the military veterans’ pension system was also approved.

The bills were introduced en masse to a voting session that started at 4 p.m. on Wednesday. Over three hours, the lawmakers passed all bills, skipping presentations and debates.

After approving the 114 bills, the legislature had a brief recess to vote on three resolutions. Some lawmakers left the chamber during the recess and failed to return. The session was stopped for six minutes because the legislature was eight lawmakers short of a quorum.

“The lawmakers abandoned the people’s hope that they would cease their political fighting for one day, the last day of the regular session,” Jung said. “It is extremely regretful that the National Assembly itself gave up its role as a legislature.”

Reminding the ruling and opposition parties that they agreed to pass the economic bills and anti-terrorism law by Wednesday, Jung urged them to approve the bills as well as the labor reform bills before the end of this year.