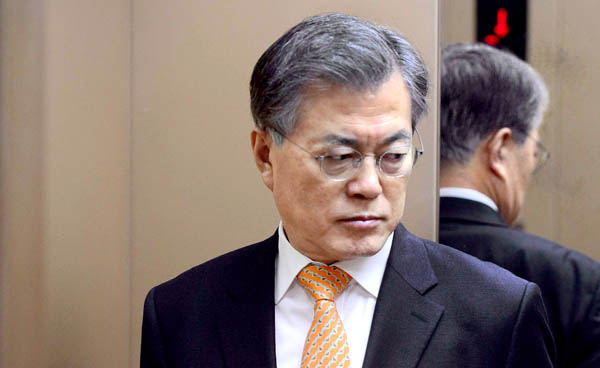 Moon Jae-in, chairman of the main opposition New Politics Alliance for Democracy (NPAD), takes the elevator in the National Assembly on Thursday. [NEWSIS]

The popularity of Moon Jae-in, the leader of the main opposition New Politics Alliance for Democracy (NPAD), has declined over the past few weeks amid a power struggle with Rep. Ahn Cheol-soo, whose approval ratings have since risen, a poll this week showed.

The Realmeter polling company also said Thursday that Kim Moo-sung, the chairman of the ruling Saenuri Party, was ranked No. 1 on the list of preferred presidential contenders in its survey, conducted Monday to Wednesday. He was supported by 22.5 percent of surveyed voters, up by 1.9 percentage points from a similar survey conducted last week.

According to the poll, the NPAD chairman’s popularity fell by 2.5 percentage points from last week, to record 16.1 percent. The gap between Kim and Moon, No. 1 and No. 2 on the list, stood at 6.4 percentage points.

Ahn, meanwhile, who challenged Moon’s leadership and demanded that a new party chairman be elected, enjoyed a boost: His approval rating stood at 11.1 percent, up by 2.8 percentage points from last week.

On Sunday, Ahn gave Moon an ultimatum to accept his demand to hold a party convention to elect a new leader, hinting that he might leave the NPAD. The chairman, however, rejected it just two days later.

Ahn’s popularity noticeably increased in the Honam region, which comprises North and South Jeolla and Gwangju.

“Honam’s support for Ahn nearly doubled from 13.9 percent to 28.5 percent over the past week,” Lee Taek-soo, who heads Realmeter, said in an interview with CBS radio on Thursday. “Mayor Park’s rating in the region went down by 8.5 percentage points, from 24.3 percent to 15.8 percent, and Park’s supporters shifted toward Ahn.”

Moon’s standing in Honam was 14.3 percent, trailing Ahn and Park.

The survey was conducted over the telephone with 1,548 voters nationwide from Monday to Wednesday. Confidence level was 95 percent, with a margin of error of plus or minus 2.5 percentage points.

Despite the numbers, the NPAD’s internal ruptures only continued to deepen Thursday as Rep. Choi Jae-cheon, the party’s chief policymaker, resigned from his post to pressure Moon to give up the chairmanship.

“No one is free from the political responsibility of the chaos within our party,” Choi said. “I am relinquishing my position as chief policymaker to take responsibility and push [Moon] to make a decision.”

On Wednesday, Moon warned that anyone who refused to perform his or her duties as party officials must immediately step down or risk being replaced.

Still, he attempted to mend ruptures by appealing to Ahn as speculation grew that the software tycoon-turned-politician would abandon the NPAD to create his own political party.

“Ahn is someone our party must have in order [for the party] to reform and win next year’s general election and the presidential election,” Moon said. “I’ll stop him from leaving at all costs.”