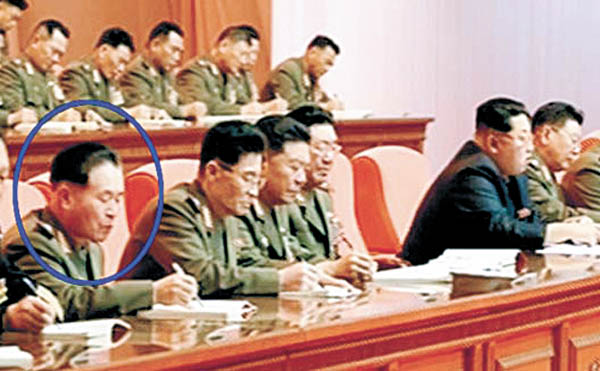 Pak Jong-chon, left in circle, vice chief of the general staff of the Korean People’s Army and the director of its fire-command department, is shown sitting in the same row with North Korean leader Kim Jong-un during a military event in Pyongyang. The photo ran on the front page of the state-run Rodong Shinmun on Saturday. [RODONG SHINMUN]

The intelligence-gathering capabilities of the National Intelligence Service (NIS) have come under question since North Korea’s state-run media ran a photograph Saturday of Pak Jong-chon, vice chief of the general staff of the Korean People’s Army and the director of its fire-command department, in attendance at a recent military event.

Pak’s appearance last week alongside North Korean leader Kim Jong-un during an event to celebrate the country’s artillery units came less than a month after South Korea’s spy agency reported to the National Assembly on Nov. 20 that Pak had likely been sacked for his subpar response on Aug. 20, when the two Koreas exchanged artillery fire across the border.

The photograph, run by the Rodong Shinmun, shows Pak dressed in military uniform and sitting to Kim’s left. His attendance is a likely indication that the vice chief still holds a senior military rank ? a direct contradiction to an NIS intelligence report submitted to lawmakers last month regarding Pak’s status.

According to sources in the intelligence community, the reports on Pak were gathered based on information collected from tapped communication channels among North Korea’s frontline units, where changes in his title would likely have been known or discussed.

The official said the intelligence community places high value on information extracted from eavesdropping on North Korea’s military communications for their accuracy.

The intelligence agency also verifies the veracity of information gathered through human intelligence resources regarding senior party officials in Pyongyang by cross-checking it with satellite imagery and press reports from the North’s state-run media.

However, the possibility remains that the NIS may have been correct in its report that Pak had been removed and was just reappointed later.

On Aug. 20, South Korean troops fired 30 rounds of 155-milimeter (6-inch) shells across the western border into North Korea after the military discovered a shell suspected to have been fired by the North Korean army.

Escalated tensions on the peninsula were eased five days later after marathon talks resulted in a six-point agreement, which Pyongyang touted as a “sweeping victory” in its favor.

In the event that Pak was sacked, it’s likely Pyongyang could have decided to reinstate him following the outcome of the pact.

Another possibility is that North Korea may have intentionally put out false information on its military communication channels, knowing it could potentially be overheard by Southern intelligence and ultimately discredit the NIS.

To prevent such a situation from being played out by the North, Nam Sung-wook, a North Korean Studies professor at Korea University, advised the nation’s spy agency to take more cautious steps in verifying intelligence gathered about the Communist state.