Korea joins the ‘200 trillion won club’ in revenue from tax

Korea joins the ‘200 trillion won club’ in revenue from tax

For the first time in the 50-year history of the National Tax Service (NTS), the nation’s tax revenue has surpassed 200 trillion won ($170 billion).

This year’s record makes Korea the 12th country to be part of the “200 trillion won club” among members of Organization for Economic Cooperation and Development (OECD).

“The total amount of national tax will exceed 200 trillion won once earned income tax is added to the count,” a government official said.

This year’s national tax is forecast to amount to 206 trillion won, a 10.2 trillion won increase from last year. Until now, there have been only 11 OECD countries that surpassed this national tax collection level, including the United States, United Kingdom and Germany. As national tax is a fixed income for the government, it reflects the country’s economic power. 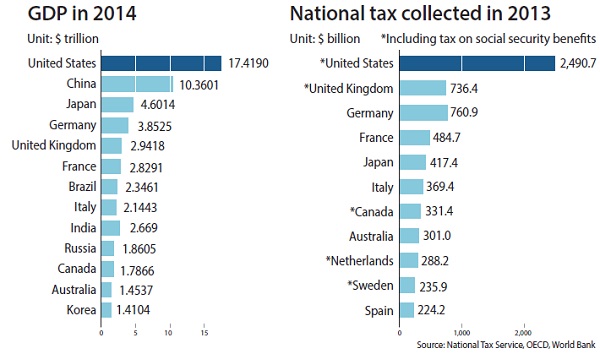 While Korea is placed 13th in terms of its gross domestic product, it has struggled to jump over the 200 trillion won mark in its national tax revenue.

When the NTS first opened in 1966, tax collected totaled 70 billion won. The current 200 trillion won is roughly 3,000 times the amount of 50 years ago. The change in national tax income is proof of the nation’s transition to a stronger economy from one of the poorest countries in the world.

Despite the nation’s sluggish economic growth lately, the increase in its gross domestic product along with the raised tax on cigarettes and improvements in the tax administration system have made increased tax collection possible.

In earlier 2000s, Korea showed stable growth of 7 to 8 percent yearly without concerns of economic declines. However, since economic difficulties hit the nation, pulling down its growth rates, the initial expectation of surpassing 200 trillion won of tax revenue in 2012 was delayed by three years. From 2012 to 2014, tax collection fell short of planned amounts for three straight years, creating a deficit in tax revenues of roughly 22.2 trillion won.

Worries over the economy spread, and some felt Korea may have to follow in the footsteps of Japan. Japan has been issuing deficit-financing bonds worth almost half the amount of the nation’s finances to cover losses caused by shortfalls in tax collection.

If there is a deficit in the national tax income, the government faces financial difficulties in managing the country and has to issue deficit-covering bonds. However, for countries like Korea, which already have high national debt over the country’s GDP with the ratio hitting over 40 percent, issuing more government bonds would have been difficult.

Concerns cleared following the swift turn in fortunes this year. The economy has earned more than 200 trillion won in national tax income, avoiding having to issue more bonds.

The turnaround was backed by the country’s economic scale. In 1966, when the NTS first started its operation, the nation’s GDP was at 1.659 trillion won. Last year, the number increased to 1,485 trillion won, which is 1,400 times the GDP half a century ago.

Ranking 13th in the world for its economic scale, the GDP of the country has grown rapidly, but the tax increase has been lagging behind. In 2013, the country recorded a minus increase in tax collection for the first time after the foreign exchange crisis. The size of the economy had already grown, but the consecutive difficulties posed on the economy since 2012 restrained further growth in the economy’s financial stability.

However, owing to a tax increase on cigarettes and a change in the tax administration system, the country has brought in a level of taxes that fits the country’s economy. The higher tax on cigarettes is expected to earn the government an extra 6 trillion won.

The revolutionary system of the NTS implemented this year also helped the tax collection process. After Lim Hwan-soo was appointed commissioner of the NTS in August last year, the institution began implementing the new “honest tax report and payment” system.

The NTS shunned the tax investigation system, which is a post-investigation scheme and induced taxpayers by providing prior notice of tax administrative information.

The NTS figured the post-investigation system further discouraged taxpayers from their economic activities, in an already depressed economic environment. Instead, the honest tax report and payment system encourages taxpayers to make a declaration of their taxes prior to investigation by the NTS. The system is especially effective for items such as value-added tax and general income tax, areas susceptible to tax evasion.

The new tax collection system was made possible by the new National Science & Technology Information Service system, which was introduced after 20 years of the old system.

The new system helped the NTS retain information of financial and transaction data of a taxpayer, making it possible to establish an individual’s tax payment status. It also allowed the NTS to encourage taxpayers to make a self-declaration before an NTS investigation.

Declaration records of the major tax items such as corporate tax, income tax and value-added tax largely improved, adding some trillion won to the tax collection. Once national tax income is increased, it rarely shrinks back.

To strengthen and stabilize management of the new tax collecting system, the NTS transferred 200 personnel from tax investigation and reassigned them to the honest payment system workforce.