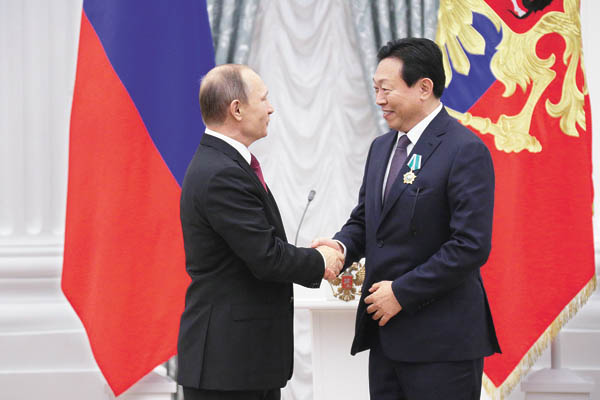 Lotte Group Chairman Shin Dong-bin was awarded an honorary medal from Russian President Vladimir Putin on Thursday for contributing to the betterment of relations between Korea and Russia.

The Russian leader granted the Order of Friendship badge to Shin at the Kremlin, in the heart of the capital city.

The Order of Friendship is one of the highest honors a foreign national can receive from Russia and is given to those who work to forge cooperation and understanding between Russia and their respective countries.

Lotte Group said on Friday that the chairman is credited with enhancing cultural exchange between the two countries and investing in Russia.

The group has been forming special ties with Russia since the 1988 Summer Olympics in Seoul, when it sponsored Soviet Union athletes. The retail group established a factory in Kaluga in 2010 after launching a Lotte Department Store in Moscow in 2007.

But the landmark business was the opening of the Lotte Hotel Moscow in 2010. The hotel was the first six-star hotel any Korean company has opened overseas.

Located in the heart of Moscow, the hotel is within walking distance of the Kremlin, Red Square and Arbat Street and has 304 guest rooms.

Lotte Hotels & Resorts will open a new property in St. Petersburg in 2017.

Russia is one of the five countries Lotte is targeting, along with Vietnam, India, Indonesia and China.

“We will constantly seek investment opportunities in Russia,” Shin said in a statement, “And we are looking for other cites other than Moscow to boost our presence.”