A new take on taekwondo and its performance

A new take on taekwondo and its performance

The World Taekwondo Federation demonstration team performs in September at the United States Military Academy in West Point, New York. The scope of taekwondo has expanded in recent years to become more of a performance art. [WORLD TAEKWONDO FEDERATION]

There is a shift taking place in the taekwondo world.

The ancient martial art, typically associated with technique, athletic discipline and footwork, is slowly making its way into the mainstream as something of a new style of dance or performance art - complete with a K-pop soundtrack, lights and all.

However, the emphasis is not the technicalities, but rather the sport’s artistry and grace.

Traditionalists have mostly focused their criticism recently on what they claim is taekwondo’s fundamental regression: Its practitioners, they argue, are too focused on competition and accumulating points during matches. 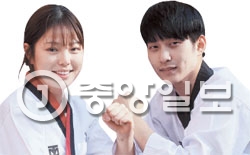 But that type of criticism is precisely what has spurred this new change and boosted the profile of what’s known as performative taekwondo, which has slowly risen in popularity due to its artistic and economic merits.

A number of domestic and foreign organizations, including the World Taekwondo Federation (WTF), the Korea Taekwondo Association and the World Taekwondo Headquarters, have already followed the trend to form demonstration teams, whose focus is to promote the beauty of the martial art worldwide.

The WTF, which was integral in successfully introducing the sport in the Olympic Games, has particularly focused its efforts on performative taekwondo.

Lee Ji-suk, 25, and Lee Yun-joo, 23, members of the WTF’s performative team, have essentially become missionaries for the martial arts style, traveling all over the world. They go abroad about 10 to 15 times a year, performing 30 to 40 times in different countries.

Lee Ji-suk has visited more than 40 nations since joining the WTF demonstration team in 2009.

“If a performance is scheduled, we prepare for it for more than three months,” he said. “We are constantly trying to improve our performance to harmonize it with the traditional music of the country we are visiting.”

But despite his busy schedule practicing and honing his performances, he said he feels happy because he can promote the beauty of taekwondo and interact with locals at the same time.

He also works as an actor, which helps, too. “I don’t feel nervous in front of cameras because performance is my life.”

“After joining a taekwondo club at my high school, I decided to major in it at university and became a member of the WTF demonstration team,” she said.

“Competition among members on the team is intense because only about 20 among 38 people can participate in the performances overseas.”

And those performances can be quite memorable. In 2011, the team performed on a helipad on the 28th floor of the Burj Al Arab, a seven-star hotel in Dubai. It was the third sports-related event held at the hotel since it opened in 1999, following Tiger Woods’ tee-off in 2004, and the match between tennis pros Roger Federer and Andre Agassi in 2005.

In May, they also performed with the International Taekwondo Federation (ITF) demonstration team from North Korea in the World Taekwondo Championships in Chelyabinsk, Russia.

“While we emphasize artistry in the performances and foot techniques, the ITF has powerful, bold choreography with a lot of hand movements,” Na Il-han, the general director of the WTF demonstration team, said. “It was an interesting and moving process to mix two considerably different routines.”

Similarly, the Dokdo Sarang Taekwondo Demonstration Team was established by the Gyeongsangbukdo Sports Council with the aim of not only promoting the sport, but heightening national interest in the Dokdo islets through performative taekwondo.

“One of our major objectives in performing taekwonmu, a mixture of taekwondo, dance and acrobatics, is to demonstrate our determination to protect the Dokdo islets,” Kim Eung-sam, who heads the council, said.

“Taekwondo is developing into a comprehensive art, which combines music, lights, arts, magic and gymnastics,” said Kim Do-gyun, a physical education professor at Kyung Hee University. “In order for taekwondo to settle down as an ‘everyday dance’ … not only should it maintain its own spirit, but it should also be developed to satisfy our contemporaries.”