A travel writer with his own set of wheels

A travel writer with his own set of wheels 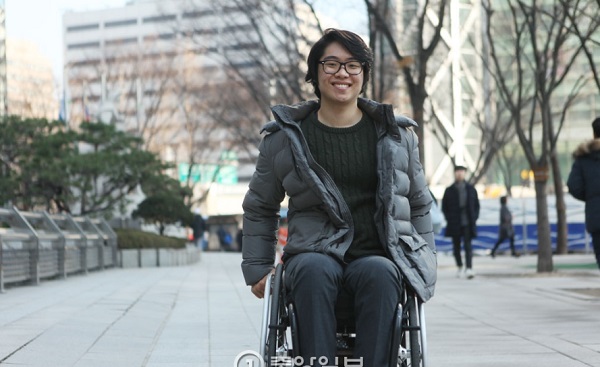 Kim Kun-ho, who was paralyzed from the waist down five years ago, is planning to publish a Seoul travel guide book written from the perspective of a disabled person. [CHOI YOUNG-KWON]

San Francisco, Los Angeles, Las Vegas, the Grand Canyon, New York and Seoul. These are the destinations that Kim Kun-ho, a 22-year-old student majoring in politics at Harvard University, managed to visit since last summer - all from the comfort of his wheelchair.

Kim has gone through major tourist sites making meticulous notes on how accessible they are for the disabled. Last October, he published free online guidebooks containing information for the disabled about 20 destinations in the United States. Recently, he started to write a Seoul guide, which he plans to publish next June.

“A disability is a mere disability,” Kim says, “so I decided to enjoy writing the tour guide, and I think it will be fun and cool.”

Kim was deliberately playful during an interview conducted on Nov. 26.

Five years ago, he had a skiing accident that paralyzed him from the waist down. He does not act like a victim. He says he doesn’t really care about the inconvenience the disability causes.

Kim’s “cool” journey began by chance while he was traveling around some regions of the United States early last year. He realized that information available for disabled travelers was insufficient.

During the summer vacation, Kim planned to travel across the United States and check famous cities in person. He uploaded a video clip promoting his plan on YouTube and tried to find financial support to publish travel guides.

But his parents opposed his plan, saying that he shouldn’t waste his time traveling and writing tour guides for the disabled. It was time he devoted himself to finding a job and building a career.

Unexpectedly, one person encouraged him: the dean in charge of undergraduate students at Harvard, Donald Pfister.

“With that unexpected help, I was able to proceed with my journey,” Kim says. “People around me changed their minds and I got sponsors as well.”

Korean-American Brad Riew and two other friends helped with the driving. Kim wrote his travelogue based on his travels in July and August last year. Kim printed 1,000 copies of his guidebook. He is planning to distribute copies after receiving online orders through the end of December.

Kim is now turning his focus toward his motherland. He took the spring semester off and is traveling around Seoul, keeping records on tourist attractions such as Gangnam District in southern Seoul and Gwanghwamun in central Seoul. His guidebook will be similar to the American guidebook except for one dimension.

“I would like to include famous old restaurants in Seoul, such as Hadongkwan or Myeongdong Gyoja, in my Seoul tour guidebook,” Kim said.

As an inspector, what is Kim’s evaluation of Seoul? He gave the city thumbs up for elevators and other facilities for the disabled in the subways, which are better than in America. But Kim points out a lack of buses for the disabled. He found it difficult to learn what time the low-floor buses, which allow the disabled in wheelchairs to easily board, arrive at a bus stop where he was waiting.

The worst places for the disabled are Korea’s palaces. He says that ancient palaces, for example, Gyeongbok Palace, are beautiful, but the pathways inside the compound are stony, making it almost impossible for the disabled in wheelchairs to move around.

Kim has already decided on his next destination: Vietnam’s Ho Chi Minh City, where he spent his middle and high school years.

“I want to travel as far as I can and make guidebooks that are read by both the disabled and non-disabled,” Kim says. “I hope to publish a guidebook on European destinations as well.”