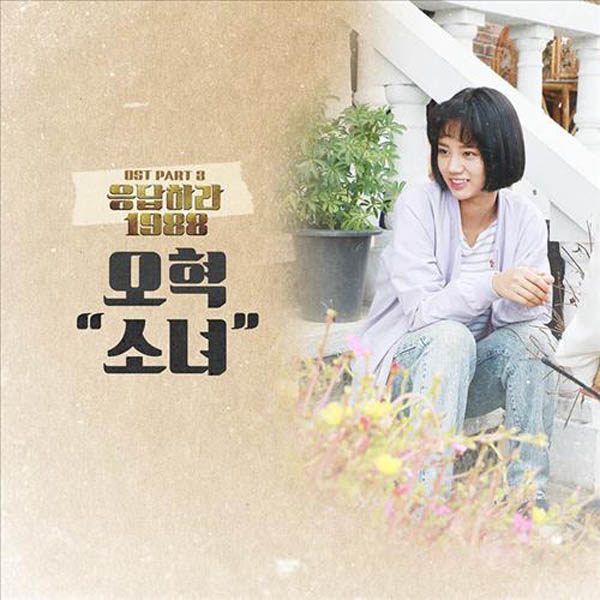 Oh Hyuk’s cover of “A Little Girl” is on the original soundtrack song for the drama series “Reply 1988.” The song is a cover of a tune by singer-songwriter Lee Moon-sae that was originally released in 1985. [TVN]

The popular cable drama series “Reply 1988” is having a big influence on the country’s online music charts, giving new life to old songs from decades past.

As of Dec. 8, three days after the Friday-Saturday drama series aired its 11th episode, three songs from the original soundtrack that are remakes of songs from the ’80s and ’90s landed in the top 10 of the most-streamed music chart at Melon, the nation’s largest online music portal.

Young singers like Oh Hyuk and Park Bo-ram added a modern twist to their renditions of the retro songs.

“Reply 1988” is the third season of the “Reply” series, which began in 2012, and the latest season has released six remade songs so far, all of which instantly found places in the top 10 spots of online music streaming charts.

Commenting on the tremendous new popularity of songs of the ’80s and ’90s, music critic Kim Heon-sik said, “There are various groups of music listeners, and some of them are feeling tired of idol pop music.

“In addition, I was really surprised to see that a 13-year-old boy knew a song by g.o.d., and he said he got to know the song through a TV audition show because young people often sing songs from the past on such shows,” Kim said. “Various factors are expanding the fan base of music of the ’80s and ’90s.”

Although “Reply 1988” is in its third season, the latest season is setting records in terms of viewership.

It earned a 13.9 percent viewership on Dec. 7, the highest ever in the show’s history and at a level comparable to that of other prime-time drama series that aired on major terrestrial broadcasters such as KBS, MBC and SBS.