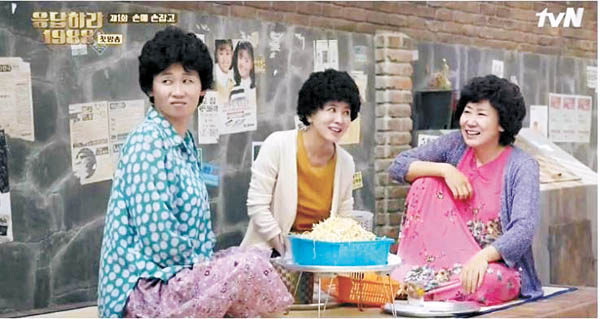 One interesting aspect of the popular cable TV drama “Reply 1988,” besides following the romantic relationships of the young lead actors and actresses, is the side plot involving three middle-aged women who all have the same short, curly hairstyle.

They gather to talk about what to make for dinner, how to discipline their children and how to provide for their families’ futures.
How have Korea’s ajumma - the term used for middle-aged women - changed over the past three decades since the 1988 Seoul Olympics? Have their roles in society changed during that time?
Here, the JoongAng Ilbo traces the history of the ajumma, or housewives, in Korea and predicts how this aspect of society will change in
the future.
Housewives, then and now

After Lee Myeong-ja, 72, married her husband - who is the only son in his family for three generations - she has been in charge of preparing meals and doing laundry for not only her husband but also her in-laws.

With so few boys in the family, the family had high expectations that Lee would have a son, but instead she had two daughters in a row. The family kept pressuring her to have another child until she finally gave a birth to a son.

At the same time, she was not able to take good care of herself, so she has frequently been sick with minor illnesses. No matter how many chores she had to do, her husband never offered to give hand in child care or housework. 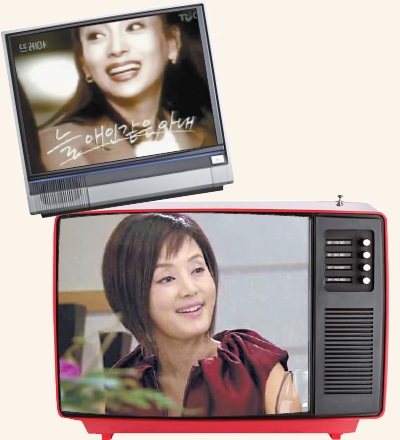 “Managing the household was all my job,” she recalled. “I was just thankful that my husband brought the money every month.”

Roughly a generation later, 34-year-old Kim Yun-hyeong became pregnant in September after detailed advance planning. Before becoming pregnant, she focused on making her body as healthy as possible and even got advice from her doctor on the best time to get pregnant.

Since becoming pregnant, Kim has been maintaining her health with the help of social networking services and smartphone apps. Her husband is active in helping her with chores and volunteers to do the dishes or cook. Recently, the couple has been discussing where to go for their babymoon - a vacation taken by expectant parents before their child is born.

Korean society has changed dramatically in terms of economic status, and at the same time, the role and lifestyle of housewives have changed greatly. Those like Lee, who got married in the 1970s, were expected to sacrifice everything for their families, and those like Kim, who got married in 2010, play the role of so-called architect moms, carefully planning out everything related to raising a family, while at the same time sharing household chores and child care duties with their husbands. 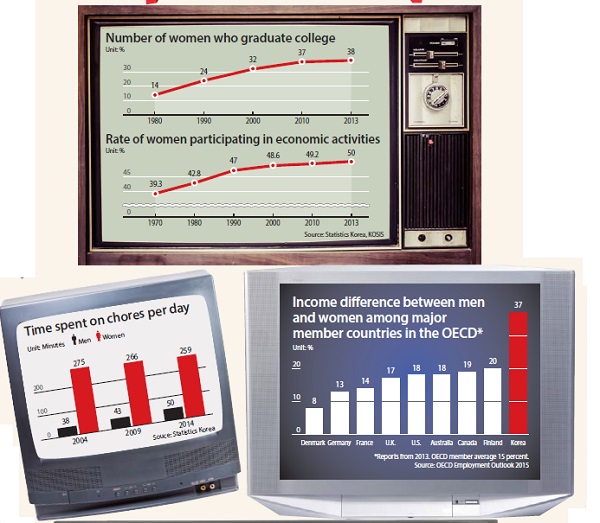 “The role of housewives has changed in regards to economic stability, social status and an increasing say in household matters,” said Prof. Bang Shin-won from the Korea Institute of Gender Equality Promotion and Education.

The Seoul Olympic Games in 1988 were the starting point of a wave of rapid economic and social change in Korea. Then in the early 1990s, married women began to focus more on themselves and their appearances instead of dedicating themselves solely to their husbands and families. These women were given the nickname “misijok,” which means unmarried women, because by ditching the short, tightly permed hair and baggy printed pants, they looked more like young, unmarried women than like typical ajumma.

The roles of married women started to become even more complicated as Korea entered the 21st century. So-called “superwomen,” who performed well both at home and at work, became the ideal. In 2007, a group of women called Ruby - an acronym for refresh, uncommon, beautiful, youthful - suggested that women should not settle for the status quo but continue to pursue new things while maintaining their beauty and youth.

Around the same time, the Internet began to play a bigger role in the lives of stay-at-home wives and mothers. In 2006, the new term “wifelogger” came about to describe housewives who do economic activities through online services. As top portal website Naver in 2008 began the system of designating so-called power bloggers, these highly connected housewives began to use their influence online to arrange group purchases of necessities and to sell their own handmade goods.

“Until the early 2000s, many managed blogs as a hobby, but recently, many are choosing their activities based on the possibility of the activities leading to financial gain,” said Hwang In-young, 48, who operates Azoomma.com, an online community for women.

Kim Myeong-ji, 43, has also become a recognized wifelogger since her blog, on which she shares tips on interior design and cooking, began to see more traffic.

“As my blog became better known, I have started to be asked to write columns or present interior design [plans],” Kim said. “My fixed income is low, but I like the idea of doing what I like doing and making money.” 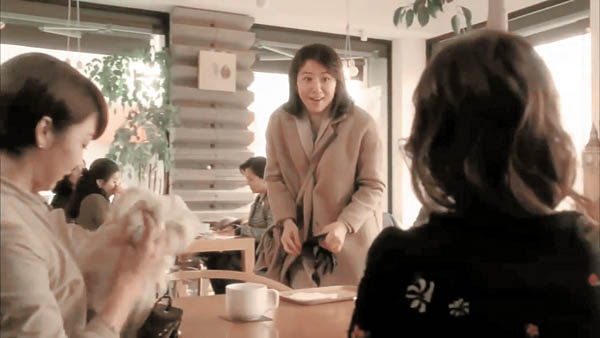 “A Wife’s Credentials,” a 2012 TV drama, depicts a mother struggling to provide a good education for her children among other moms in Gangnam District, southern Seoul. [JoongAng Ilbo]


As Korean housewives have evolved to focus more on themselves and their health compared to their predecessors, their stance toward raising their children has also changed.

Experts say that in the 1980s, busy mothers were focused mostly on providing good food for their children and consoling them in times of trouble. Back then, it was rare for schoolchildren to be stressed about getting good grades.

“Back in the days when people were working hard just to get by, only the ones who were noticeably smart or more talented were encouraged to advance academically,” said Prof. Chang Phil-hwa of Ewha Womans University’s Center for Asia Women’s Studies.

The trend of parents getting more involved in their kids’ education began in the 1990s. In 1995, colleges were given the ability to set the number of students they would accept, and the following year, private after-school lessons called gwawoe became available, resulting in more students entering college. In the 1980s, only 27 percent of high school graduates went to college, a number that shot to 70.9 percent last year.

Another reason parents are focusing more attention and resources on their children’s education is that people are generally having fewer children. The trend of overeager and competitive moms who move to Gangnam District, southern Seoul, to enroll their children in the best academies, while themselves taking jobs at karaoke rooms in order to pay the steep tuition fees, was portrayed in TV programs such as the 2007 drama “Catching Up With Gangnam Moms.”

Around that, the term alpha mom has arrived on the scene to describe mothers who try to cultivate their children’s talents from early on and provide specialized training. Most of the time, these mothers are hoping to raise their kids to fill the most highly respected roles in society, such as judges, prosecutors and doctors.

Kim Nan-do, a professor at the College of Human Ecology at Seoul National University who wrote “Trend Korea 2016,” speculated that the alpha mom has now transformed into the architect mom. These present-day moms don’t focus on pursuing certain jobs for their kids. Rather, they observe the areas in which their children show talent and help them make the most of their skills.

“There are more housewives who are open to their kids exploring diverse jobs,” Kim said. “What’s currently seen is much different from before, when moms only pushed their kids academically.”

Although it seems like a lot has changed, the fact that women do the majority of household chores and child rearing hasn’t changed much. When looking at the amount of time spent on chores per day, husbands spent 38 minutes back in 2004 and 50 minutes in 2014, while wives spent 4 hours 35 minutes in 2004 and 4 hours 18 minutes last year.

So although husbands are participating more in housework, they still spend only one-fifth as much time as their wives doing chores.

“I feel bad seeing my husband going to work at 7 a.m. and come back home after 10 p.m., but I get really annoyed that he never washes a glass after drinking water and leaves socks everywhere,” said 44-year-old housewife Choi Nam-hee.

She also becomes upset when her husband downplays the amount of work she does at home and says that managing the household is no easy job. “I have no time to rest as I have to focus on my children’s studies and take care of household matters.”

These same conflicts are reported by working mothers. Park Young-ok, a 39-year-old mom who works at a conglomerate, wakes up at 6 a.m. to get ready to send her kids to preschool. But she never finds time to feed herself.

It is also Park’s job to check her children’s homework. On weekends, she takes her children to art galleries so they do their homework, and she also goes to her in-law’s place on the weekend.

“Both child care and chores are basically my job,” Park said. “I want my own alone time.”

These daily duties are the biggest factor that keep women from feeling more satisfied with their lives.

“Chores may seem to be easier with advanced home appliances that assist in cleaning, laundry and doing the dishes, but the amount of labor and psychological pressure for child care has not changed much even when compared to a few decades ago,” said Prof. Kwak Keum-joo, a professor of psychology at Seoul National University.

The question remains whether the status quo will ever change to offer a different future for Korean housewives and mothers.

“Raising a child has to be considered as something of a national-level job, and we need to be more considerate of children and moms,” Chang said.