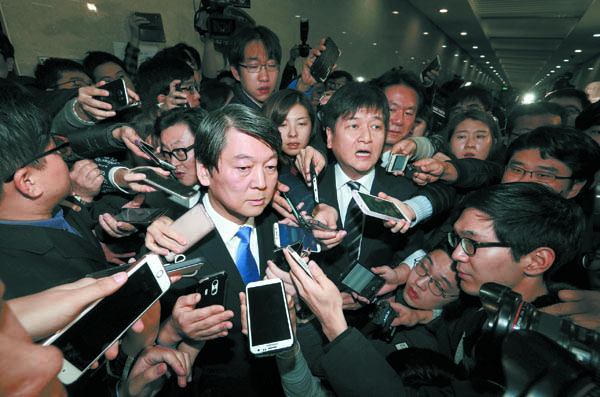 Ahn Cheol-soo, a lawmaker and former co-chairman of the main opposition New Politics Alliance for Democracy, is swarmed by reporters at the National Assembly after announcing his defection from the NPAD on Sunday in a press conference. [KIM SEONG-RYONG]

Ahn Cheol-soo, a lawmaker and former co-chairman of the New Politics Alliance for Democracy (NPAD), declared his defection from the party on Sunday, nearly triggering a split in the country’s main opposition party.

Ahn’s move signals that the political landscape in Korea will greatly shift in the lead-up to the general elections in April, prompting dozens of other liberal lawmakers to join in leaving the NPAD and creating a new movement.

“I am leaving the New Politics Alliance for Democracy today,” Ahn said in a press conference Sunday morning. “I vow to create a political group that can win the next presidential election. In order to do make this happen, I will do everything I can.”

Ahn’s announcement comes after negotiations with current NPAD Chairman Moon Jae-in over electing a new leader failed. Korea’s main opposition party has been grappling with plummeting popularity for months since its defeat in the parliamentary by-elections last April.

The software mogul-turned-politician co-founded the NPAD in March 2014 along with Democratic Party leader Kim Han-gill.

“If this change cannot be done within the party, it should be brought by a strong shock from outside,” Ahn said.

However, he did not elaborate on concrete plans for forming a new party or running the upcoming general election.

Moon Byung-ho, an NPAD lawmaker and Ahn’s former chief of staff, appears set to be the one to start the domino effect. He said he planned to hold a press conference Tuesday morning with other lawmakers to leave the party, predicting that the chain of lawmakers’ defection will be carried out by the end of December.

Moon added that it would not be challenging to recruit more than 20 legislators, the number required to forge a new negotiation bloc inside the National Assembly.

“In a week, five to 10 lawmakers representing the Jeolla region and Gwangju are expected to join. And by the end of this year, up to 30 lawmakers are likely to abandon the party,” he said.

Ahn, who co-chaired the NPAD from March 2014 to July 2014, demanded earlier this month that a party convention be held to elect a new leader for the main opposition and issued an ultimatum to incumbent leader Moon Jae-in. 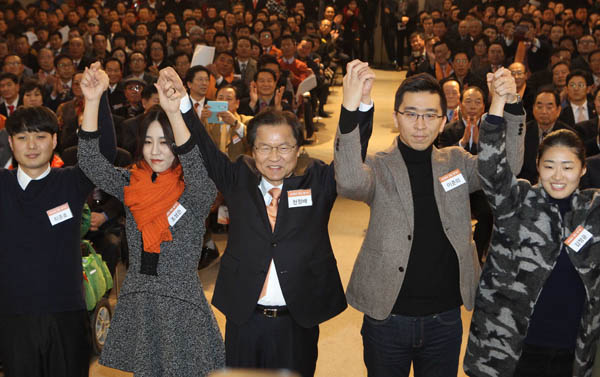 Chun Jung-bae, third from left, an independent lawmaker, launches a preparation committee to form a new political party on Sunday in Seoul. His moves have heightened speculation that he and Ahn Cheol-soo, who defected from the main opposition New Politics Alliance for Democracy on Sunday, could join forces and create a new opposition movement. [OH JONG-TAEK]

Moon Jae-in insisted on Sunday that the party would not stop sailing toward victory in upcoming polls and referred to the Latin phrase, “Fluctuat nec mergitur,” or “Tossed but not sunk,” which came to symbolize Parisian resilience following the terror attacks on the city a month ago.

He told lawmakers Sunday afternoon that he felt sorry and regretful that Ahn had left the party.

A last-minute visit to Ahn’s home late Saturday also failed to persuade Ahn against leaving the party. The NPAD chairman met with Ahn only briefly, after waiting 40 minutes at his front door, but was turned away empty-handed.

After Ahn announced his defection on Sunday, the party’s Supreme Council held an urgent meeting and pledged to do their best to overcome the challenges ahead.

Among the NPAD’s nine-member decision-making body, two have stepped down to press for Moon’s resignation. Opposition floor leader Lee Jong-kul, a member of the council, was absent from Sunday’s meeting after having announced a boycott.

On Sunday, the ruling Saenuri Party slammed Ahn’s defection from the NPAD as a suspicious political performance.

Saenuri spokesman Kim Young-woo went so far as to speculate that his desertion was simply a political gesture to unify the powers in the opposition bloc in a bid to win the general election.

Since 2012, Ahn has served as a critical catalyst for reorganizing the political landscape. The software mogul ran as a presidential contender in the race the same year, but eventually dropped out to throw his endorsement behind Moon Jae-in, who narrowly lost to President Park Geun-hye.

The fate of the opposition is now likely to hinge on the two political veterans who have left.

Political experts have floated the potential of an alliance between Ahn and Chun Jung-bae, a former NPAD lawmaker who left the party earlier this year, which they say could help them wield their influence among the opposition parties.

Chun launched a preparation committee on Sunday to form a new political party by January under his leadership, declaring that the NPAD “has died.”

When asked if he was willing to cooperate with Ahn, he said he was open to communication and the sharing of ideas in any form.

Chun’s core aides touted the idea of a possible alliance between Ahn and Chun as a rosy plan, which could ideally unify the Yeongnam and Honam regions, the lawmakers’ political home turfs. Ahn’s announcement on Sunday also drew attention to the possible whereabouts of political heavyweight Sohn Hak-kyu, the former chairman of the main opposition party.

Sohn has shunned outside contact since he retired last year.

Ahn’s political aide, Moon Byung-ho, said Sunday afternoon that he would contact him.