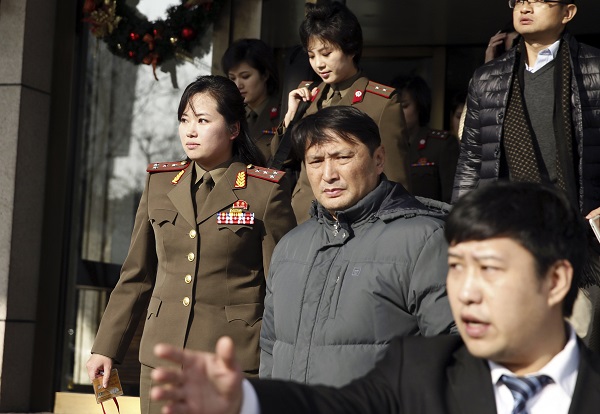 In this photo taken Friday Dec. 11, members of the Moranbong band wait to leave the hotel for a rehearsal in Beijing, China. The all-female band formed by North Korean leader Kim Jong-un canceled its concerts in Beijing and abruptly left the Chinese capital on Saturday for unknown reasons, possibly further cooling relations between the traditional allies. [AP/NEWSIS]

The Moranbong Band had been scheduled to hold three concerts in Beijing beginning Saturday night in what was viewed as a visit to cultivate ties between the countries.

The performance “cannot be staged as scheduled due to communication issues at the working level,” the official Xinhua News Agency said, citing a news release from unnamed “relevant departments.”

A staff member at the National Theater, where the band was to give the invitation-only performances, said the concerts had been canceled, but did not give a reason. An accompanying North Korean musical troupe, the State Merited Chorus, also pulled put because of the communication issues, Xinhua said.

Calls to the International Department of the Communist Party's Central Committee, which organizes exchanges with foreign political parties, rang unanswered on Sunday and there was no statement available online.

Although North Korea is well known for its unpredictability, the sudden cancellation of the concerts could hurt relations between Beijing and Pyongyang. Ties between the sides have been noticeably cooler since Kim assumed power in 2011.

The news release quoted by Xinhua said China attaches high importance to cultural exchanges with North Korea, and was “ready to continue to work with it to promote the bilateral exchanges and cooperation in culture and all other areas.”

The band's abrupt departures might have been related to stories circulated by the South Korean media about a rumored past relationship between the married Kim and a female member of the band, which also made rounds on Chinese social media, said Yang Moo-jin, a North Korea expert at the University of North Korean Studies in Seoul.

North Korea has built a cult of personality around the Kim family, which has ruled for three generations, and sees any outside criticism or mockery of its leader as an attack on its sovereignty.

“There are few things the North takes more seriously than an attack on the dignity of its supreme leadership, and it might have decided to bring the female members of the band back quickly to cut off such reports,” Yang said.

While China continues to provide crucial economic support and diplomatic cover for Kim's impoverished communist regime, the North Korean leader appears to have used defiance of Beijing to shore up perceptions of his own power and independence of action.

Relations appeared to be on the mend following a well-publicized visit to Pyongyang by high-ranking Chinese official Liu Yunshan in October. However, Kim's unwillingness to visit China and his government's refusal to restart denuclearization talks have frustrated the Chinese leadership.