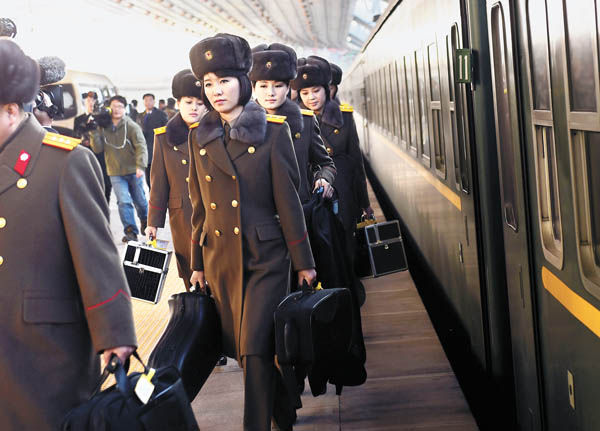 Members of North Korea’s State Merited Chorus and the Moranbong Band disembark from a train on Thursday at a railway station in Beijing. The two troupes were scheduled to perform at the National Center for the Performing Arts in Beijing from Dec. 12 to 14, but they abruptly returned to Pyongyang hours before the concert was scheduled to kick off. [XINHUA/NEWSIS]

The details over why a much-anticipated performance by North Korea’s all-female Moranbong Band was canceled at the last minute in China on Saturday - and what repercussions it will have on diplomatic relations - remained unclear on Sunday.

Members of the Moranbong Band, as well as North Korea’s State Merited Chorus, a military band, were scheduled to perform at Beijing’s National Center for the Performing Arts on Saturday evening as a part of a goodwill tour that would last for three days. However, they abruptly returned to Pyongyang hours before the concert was set to begin.

China’s state-run Xinhua News Agency reported the concert was canceled because of “communication issues at the working level,” without elaborating further. “China attaches great importance to cultural exchanges between the two countries,” it continued, adding that it is willing to work with Pyongyang to promote bilateral exchange.

The cancellation led to speculations over what triggered Pyongyang to pull the plug on the concert, including North Korea’s dissatisfaction with the fact that higher-ranking officials were not attending the performance.

The band, known to be hand-picked by North Korean leader Kim Jong-un, headed to Beijing on Wednesday for their first-ever overseas tour since they were founded in 2012.

They sing, dance and also wield world-class music instruments, both electric and classical, including synthesizers, guitars, drums and even the violin.

Some two dozen young women traveled from Pyongyang by train, spending Wednesday night in Dandong, northeastern China, to arrive in Beijing on Thursday. The band held a rehearsal at the National Center on Friday and was reportedly residing in a luxury hotel.

Tickets to the concert were invitation-only and reported to have been sold to the public for a high price on the black market.

On Saturday afternoon, the band members were pictured in matching fur caps and double-breasted military coats at the Beijing Capital International Airport, heading back to Pyongyang, this time via plane, on Air Koryo.

They were accompanied by North Korean Ambassador to China Ji Jae-ryong.

The withdrawal of the Moranbong Band would most likely have come under Kim’s orders, but it could have been in response to a number of reasons - Chinese officials’ slated absence from the performance or issues with the program or international press reports.

Yonhap News Agency reported on Sunday that China initially agreed to send a top-ranking official of the Politburo Standing Committee of the Central Political Bureau, the Chinese government’s top leadership body, to the concert on Saturday.

However, it decided to send a vice-minister-level official instead following remarks by Kim about North Korea developing a hydrogen bomb, according to a Chinese government source cited in the article.

On Thursday, Kim was quoted in state media as saying that North Korea had the capabilities to produce hydrogen bombs alongside atomic bombs, though experts were quick to question the veracity of the North Korean leader’s claims.

“It is likely that they had a falling out over participation by high-level Chinese officials,” a South Korean government official speculated on the reason behind the concert’s cancellation.

Likewise, North Korea may have taken issue with unflattering articles written about Kim’s alleged former girlfriend, Hyon Song-wol, the leader of the band who has often been at the center of false speculations, including rumors that she had been executed.

However, “while it is nothing to feel good about, [Pyongyang] would not cancel the performance over something like that,” a North Korean source said.

North Korean media stayed mum over the weekend on the details around the cancellation, though it appears that Pyongyang pulled out in protest or dissatisfaction, rather than Beijing.

A Chinese government official told the JoongAng Ilbo, “We didn’t prevent them [from performing].”