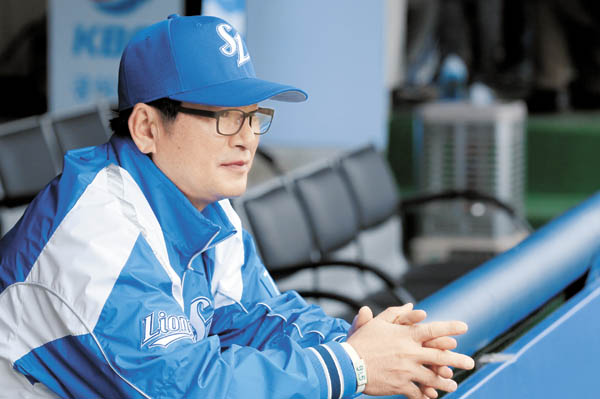 Samsung Lions manager Ryu Joong-il watches a KBO League game this April against the Lotte Giants. Ryu has won the KBO championships since his debut as manager in 2011, but this year, his team lost to the Doosan Bears. [YANG GWANG-SAM]

Samsung Lions manager Ryu Joong-il is heading for his regular winter vacation in Thailand at the end of this week, but there’s something missing this year.

For the first time in five years, he will be facing a winter without the Korean Series title in his hands.

After attending the 2015 KBO Golden Glove Awards last week, the 52-year-old has been staying home in Daegu. This Friday, he will take off on vacation with his wife, as he has done for the past three years.

Since his managerial debut in 2011, Ryu has won each regular season title and Korean Series title - until this year. Although the Lions finished No. 1 in the regular season, they fell to the Doosan Bears 4-1 in the best-of-seven championship series in October.

“It’s sad and really regretful,” Ryu told the JoongAng Ilbo. “It’s been more than a month, but I can’t get rid of thinking about the Korean Series. I probably won’t forget for a long time.”

Ryu is already in the history books of the Korea Baseball Organization. The Lions are the only team to win the regular season and the Korea Series for four straight seasons.

The Haitai Tigers (now the Kia Tigers) also claimed the Korean Series title for four consecutive years from 1986 to 1989, but they had only one regular season championship, in 1988.

Ryu, who has been with the Lions since 1987 as a player and a coach, wanted to win this year’s Korean Series title badly because that would have made them the ultimate No. 1, ahead of the Tigers in terms of consecutive championship titles.

“I have been winning since 2011, and I wanted to win again,” he said. “You know, human greed just never ends.”

However, while waiting for their opponents in the championship series, the Lions were hit with an illegal gambling scandal involving three of their pitchers.

The Daegu-based club eventually apologized for the scandal and excluded Lim Chang-yong, Yoon Sung-hwan and An Ji-man from the championship roster.

“Honestly, I thought we were alright even without three players because the Bears seemed tired from playing two of the playoff series to reach the Korean Series,” he said. “When we won Game 1, I thought we could again grab the opportunity to win the championship, but it wasn’t [meant to be]. I learned again that baseball is really
difficult. It doesn’t end like you want it to.”

Ryu says the Lions were initially disheartened after losing three pitchers due to illegal gambling charges.

“I said in media interviews that since our pitching was weakened, our offense should perform well,” he said. “Apparently, this put pressure on our batters. But I would do the same today … because we lost with poor offense.”

But the Lions weren’t sore losers. They acknowledged their defeat and lined up in front of their dugout to applaud the Bears while they lifted the trophy. Fans have praised the Lions for their response. Usually, the runner-up in the Korean Series waits inside their dugout, and after the ceremony, they bow to fans and leave the stadium.

Ryu, a two-time Golden Glove-winning shortstop, said there were two reasons to applaud the opponent: First, as a courtesy of respect for the champions, and second, to motivate and wake up his players.

“I hope players know that the difference between No. 1 and No. 2 is big,” he said. “I made up my mind that I should get rid of conceit and go again for the championship. I hope players have the same mindset as me.“

But the Lions’ outlook won’t be the same next season. Last week, Samsung Group announced that just like its football, volleyball and basketball teams, the baseball club will also be managed by its advertising and marketing unit, Cheil Worldwide, starting next year. Previously, the Lions operated as an independent entity, but got a budget of more than 40 billion won ($33 million) from Samsung Group affiliates. But now, under Cheil Worldwide, the team is expected to have a smaller budget.

The signs of a shrinking budget were shown in this winter’s transfer market. The Lions failed to re-sign their third baseman Park Sok-min, who became a free agent. Park later signed a four-year deal worth 9.6 billion won with the NC Dinos.

“Park’s void will be big,” Ryu said. “From now on, the Lions will operate by raising young players from the minors instead of signing free agents. It won’t be easy to foster prospects, but the atmosphere is already that way.”

The Lions also have to deal with the loss of three pitchers who were allegedly involved in illegal gambling overseas. Among the three, Lim is already out. The Lions excluded him from the reserve list after the he admitted to some of his charges to prosecutors.

“Nothing is determined for Yoon and An,” Ryu said. “We just have to wait for the police investigation.”

Ryu knows that some experts are now deleting the Lions from the title contender list. However, he emphasized that the Lions’ goal next season will be the championship.

“We have been champions, but from now on, we are challengers,” he said.

“After next season, outfielder Choi Hyoung-woo and lefty pitcher Cha Woo-chan will become free agents. If the veterans are out, that means there will be an opportunity for new prospects.”

While fans expect there will be more training for next season, Ryu said this wasn’t the case. “People don’t recognize how much we’ve been training because we’ve always won,” Ryu said. “Now, we should start from the beginning. I can’t say we can’t win the championship just because a couple of players are out. That’s an excuse.”