MMCA head aims to show Korean art to the world

MMCA head aims to show Korean art to the world 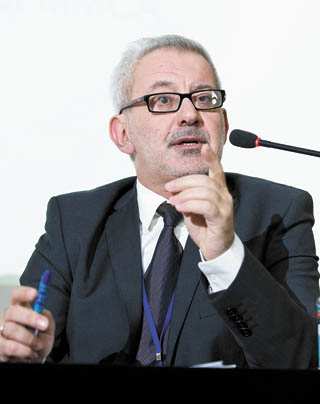 Bartomeu Mari Ribas, the first foreigner to head Korea’s National Museum of Modern and Contemporary Art (MMCA), pledged to “create a new model of institutional contribution to the relations between artists and the society” in a press conference on Monday.

Regarding the Nov. 12 letter by some 500 Korean artists and curators that expressed concerns about the censorship controversy surrounding him, Mari said he would guarantee freedom of expression.

The Spain-born Mari resigned as director of the Barcelona Museum of Contemporary Art in March after he canceled “The Beast and the Sovereign” exhibition, which included a work that satirizes the former Spanish king. Two curators subsequently left the museum during the controversy.

At the press conference at the Central Government Complex in central Seoul, Mari said the curators withheld some information, which delayed the opening of the show, and then he stepped down to take responsibility. He explained that he did not fire the curators over the exhibition scandal but that their contract terms expired. The expiration came after he resigned, he added.

“I can show you the related documents at any time,” he said.

Earlier in the day, Korea’s Culture Minister Kim Jong-deok appointed Mari, 49, as the new director of the MMCA.

“I hope people will remember great exhibitions at the MMCA, not the director,” Mari said.

“I know great Korean artists but don’t know well the thread that links them together,” he continued, expressing his desire to understand the thread and to help the international art community get to know it, as well.

His remarks suggest that the MMCA’s first foreign head will focus on creating exhibitions to help frame Korean modern and contemporary art history in the context of global art history, which is a basic and universal purpose of a state-run museum, rather than reforming the museum’s administration, which has been regarded as an urgent necessity at the MMCA.