Business worries about Paris accord

Business worries about Paris accord 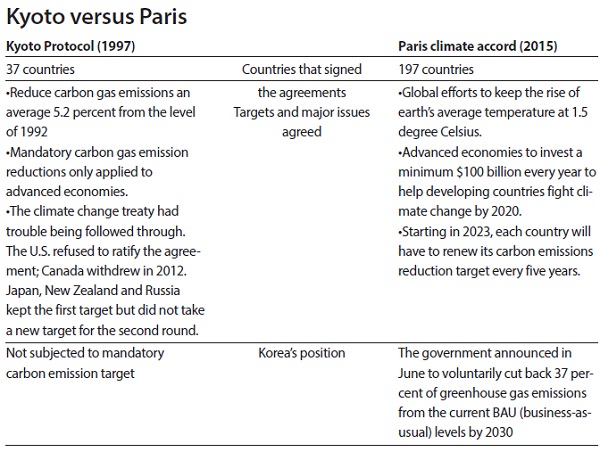 Korea’s biggest airline, Korean Air, has been involved in a project planting trees in China and Mongolia to combat desertification, a major environmental problem in the neighboring regions, since 2007.

The company has planted over 1.3 million trees so far.

Such environmentally friendly initiatives improve Korea’s image and can be good for business. But companies will have to do a lot more than planting trees after the climate change deal signed in Paris last week.

Korea was one of 195 countries that gathered in Paris and agreed to battle global climate change by limiting a rise in the global temperature to less than 1.5 degrees Celsius (2.7 degrees Fahrenheit). In the Paris climate accord, Korea and other countries also agreed to review their carbon emissions target every five years.

Environmentalists around the world cheered the pact. There was much less enthusiasm by Korean companies, who claimed that readjusting emissions targets every five years is too much of a burden - especially on top of the Korean government’s voluntary decision to cut emissions by 37 percent.

Seoul pledged at the end of June that it would cut back its carbon dioxide emissions by 37 percent from the business-as-usual (BAU) level by 2030. This was tighter than the voluntary target Seoul set for itself in 2009 when the Lee Myung-bak administration announced it would cut emissions to 30 percent of the 2005 level by 2020.

Both were major steps from 1997, when the Kyoto protocol was announced. Korea wasn’t even included in the 37 countries that signed the agreement and was not bound to any mandatory cutbacks.

If emissions grow at the current pace, the total amount is projected at 865 million tons by 2030.

About 60 companies opposed the government’s plan and issued a joint statement.

“The government’s 37 percent reduction plan is harsh enough, but they are also going to revise the percentage every five years,” said Ryu Hwan-ik, a director at the Federation of Korean Industries, a business lobbying group. “This is forcing manufacturing industries to become service industries.”

Korea’s greenhouse gas emissions total 6 million tons a year, which is the seventh largest in the world. However, local emissions only account for 1.8 percent of the total emissions released globally.

“Countries like China (28 percent) and the United States (15 percent) produce a whole lot more emissions, and I do not understand why the government is taking such a hard stance on this issue,” a business insider argued.

Moreover, the Korean economy is more dependent on manufacturing industries than other advanced economies that signed the accord in Paris. The accord will have a major impact on industries that are already struggling, including steel and petrochemicals.

There are concerns that companies might be discouraged from investing in environmentally friendly initiatives because it takes time to achieve meaningful reductions in greenhouse gas emissions.

But not all industries condemned the carbon emissions targets.

“Eco-friendliness” can generate new business opportunities. Companies involved in the trend will have advantages. For example, smart cars will account for 75 percent of the world’s car market by 2020, according to research firm TrendForce. Smart cars often have better fuel efficiency. Samsung recently announced that it will enter the smart car market.

Some analysts say a “green big bang” phenomenon will be felt in the nation’s energy industry, leading to new opportunities.