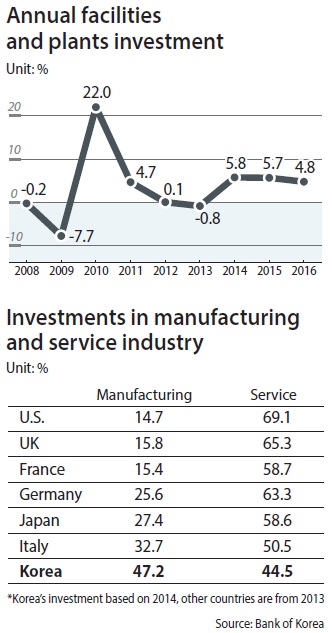 What would it take for Korea to maintain the 3 percent growth it craves so desperately?

According to a study by the Bank of Korea released on Monday, for the economy to enjoy above 3 percent growth, it needs a 5 percent increase from the private sector in investment on facilities and plants.

This year that investment is expected to increase 5.7 percent compared to a year ago. This is the second year that type of investment has seen 5 percent growth. Last year investment on facilities and plants grew 5.8 percent.

In recent years companies have been reluctant to spend on upgrading machinery and expanding factories due to the glum economic situation. While investment barely grew in 2012, only inching up 0.1 percent compared to the previous year, in 2013 it actually declined 0.8 percent.

Investment in facilities and plants plays an important role in the Korean economy. Korean companies have had larger investments in manufacturing than in service industries compared to other advanced economies such as the U.S., Germany or Japan. According to the BOK report, investment in the service industry in the U.S. accounts for 69.1 percent while manufacturing accounts for 14.7 percent.

The biggest question is whether the 5 percent investment expansion will continue next year. The Korean central bank’s research doesn’t think so. It projects that next year such investment will see slower growth of 4.8 percent.

The Korea Development Bank has a far more negative view than the BOK. It projected investment would grow 3.5 percent next year.

Growing uncertainties in the local market and overseas were considered to be the biggest cause of a cutback in investment last year. Actual investment by companies between 2011 and 2014 was 4.7 percent less than what companies promised at the beginnings of the years.

In a survey conducted by the Federation of Korean Industries in April, 30 percent of companies said they were unsatisfied with the government’s deregulation efforts.

The BOK also said some companies were barely surviving and avoided closing thanks to the low interest they pay on their loans. Investments made by companies on the verge of bankruptcy reported an average annual decline of 20.9 percent between 2011 and 2014.

“This year’s and next year’s investment growth is expected to be relatively better than previous years but this is largely because the growth registered in 2012 and 2013 was too low,” said Han Min at the BOK’s research team. “But considering the recent conditions for investment, it won't be easy to achieve growth in the 5 percent range in investment.”