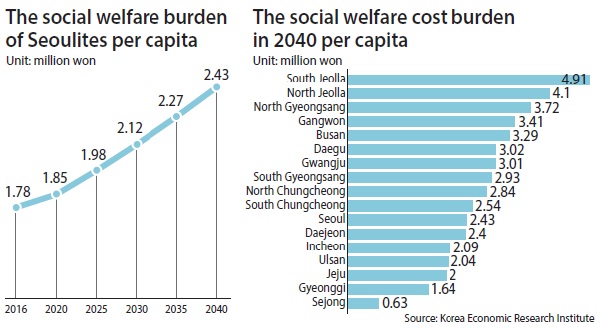 Working-age Koreans will pay up to an average of 4.91 million won ($4,144) in social welfare costs by 2040, according to a report from a private think tank on Monday.

As society increasingly ages, the percentage of individuals capable of working in the total population - people aged between 15 and 64 - is expected to fall by as much as 22 percent from 2016 to 2040, the Korea Economic Research Institute said. That will raise the welfare cost burden for the working population by up to 50 percent over the same period.

“The results are based on the premise that the welfare spending at present will be sustained through 2040,” said Huh Won-jea, a KERI researcher who wrote the report. “If the social welfare expenditure grows, the per-capita burden for workers will get bigger.”

He proposed that the government eliminate overlapping welfare businesses and services, prioritize welfare benefits according to urgency and ease immigration regulations for foreigners to increase the working population.